In the early 1950’s, McClymonds High School in Oakland, California boasted a rich amount of talent in both basketball and baseball. While future NBA Hall of Famer Bill Russell was dominating the competition on the hardwood, three students were making a name for themselves on the baseball diamond. Curt Flood, Frank Robinson and Vada Pinson had many years of big league baseball to look forward to, but their time as McClymonds Warriors would shape the way that they viewed the world. Eventually, each would leave his own unique mark on the game of baseball. This is their story.

Entering high school in the fall of 1949, Frank Robinson had visions of a basketball career, not one in baseball. Bill Russell was a year ahead of him and by the time Robinson was a sophomore, Russell was leading the Warriors to the first of two straight state championships. Robinson helped Russell win it all in 1952 but his greatest talent was on the baseball diamond.

Frank Robinson could do it all on the field: hit, hit for power, run, throw and field. In those days, McClymonds was a true power in baseball and with Robinson on the team they were nearly unstoppable. They got even better during Robinson’s senior year when two freshmen enrolled: Curt Flood and Vada Pinson.

Initially, Pinson had many other interests than just baseball including the trumpet in the school band. However, baseball won him over and he kept the trumpet as a hobby. Flood had his distractions from the diamond as well including painting. While these two pursuits were at time distracting, it kept these two players well rounded and their minds sharp.

After three years in the minor leagues, Frank Robinson came to Cincinnati ready to shine in 1956. He recorded 166 hits, 122 runs and 38 home runs while being named the Rookie of the Year and making his first All Star Game. He was even better in 1957, raising his batting average to .322 while making another All Star Game. Robinson didn’t make the All Star roster in 1958 but he did earn his only Gold Glove Award and hit 31 home runs. He was an All Star again the following year by slamming 36 home runs and raising his batting average to .311. He barely missed hitting .300 in 1960 and missed the All Star game. But his journey was far from over.

Curt Flood didn’t spend much time in the minor leagues and was playing for the Reds in the same year that he graduated from high school, albeit sparingly. He struck out in his lone plate appearance in 1956 but did hit a home run in three plate appearances the following year. He was traded to the Saint Louis Cardinals in 1958 where his star would shine for the next decade.

Flood hit ten home runs in his first year in the Gateway to the West and went into a slump for the next two years, never batting at least .300 or slamming ten home runs. Things began to pick up for Flood in 1961 when he batted .322. The following year he hit 12 home runs while driving in 70 runs. Through his early years, Flood never made an All Star Game. In the years to come, that would all change.

Vada Pinson hit the ground running as a professional athlete in 1959. He made the All Star Game his first two full seasons with the Reds, hitting 20 home runs each year and having a batting average as high as .316 in 1959. From there, Pinson would never reach another All Star Game. However, in 1961 he earned the only Gold Glove Award of his career. While his career never reached the level of his two teammates from Oakland, Vada Pinson’s career was consistent. 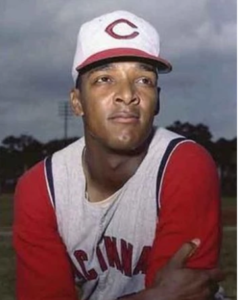 After his last All Star season in 1960, Vada Pinson averaged 20 home runs each year until 1967.The 1968 season was his last with the Reds and he was disappointing, hitting just five home runs and batting in 48 runs. He signed with the Cardinals in 1969, driving in 70 runs in his lone season with the team.

He began the 1970’s in Cleveland where he had a resurgence in 1970, slugging 24 home runs and batting in 82 runs. He was never as effective again, hitting just 11 home runs the following year. The next three years were tougher for Pinson as he began to lose power, never reaching even ten home runs. However, those years were not a complete failure as he still had a reliable bat, averaging no worse than .260 between 1972 to 1974. After hitting 15 home runs between 1972 and 1973 with the California Angels, Vada Pinson finished his final two years with the Kansas City Royals. After an injury marred 1975 campaign where he hit four home runs and drove in 21 scores, Pinson called it a career. He passed away on October 21, 1995 in Oakland. 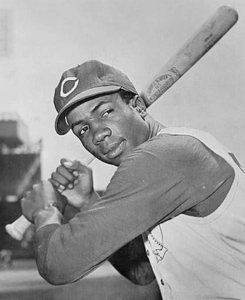 1961 was a special year for Frank Robinson who earned his first league MVP award after scoring 117 runs, hitting 37 home runs and driving in 124 runs. The low point of the season was losing to the New York Yankees in the World Series. Robinson gave it his all in the series, but his three hits and lone home run were not enough to keep the Reds from losing in five games. He was determined to never have that sickening feeling of losing the World Series again. Robinson hit 51 doubles in 1962 and had 380 total bases, both personal bests. While he didn’t make the All Star team the next two years, Frank Robinson was still consistent, hitting 21 and 29 home runs respectively those two years.

Frank Robinson’s time in Cincinnati came to an end following a 1965 campaign which saw him earn a sixth All Star invitation. From Cincinnati, Robinson moved on to the Baltimore Orioles who were getting ready to make a run at the World Series. 1966 was another magical year for Frank Robinson as he won the league MVP, making him the only player to win the league MVP of both the American and National leagues. He hit a career best 49 home runs, drove in 122 runs and batted .316 in 1966, cementing his status as a uniquely iconic player.

Emboldened from his recent championship, Frank Robinson went on a tear the next few years, slugging 77 home runs in the next three years and making two out of three All Star Games. 1970 was yet another magical year for Robinson as the Orioles once again won the World Series, this time over the Cincinnati Reds, Frank Robinson’s old team. Wanting to redeem themselves from their World Series defeat to the New York Mets the year before, the Orioles defeated the Reds in five games. Frank Robinson played well in that triumphant series, recording six hits, slugging two home runs and driving in four scores as he helped his team claim redemption.

Robinson played well in the following year’s World Series too, recording seven hits and two home runs, but the Orioles lost to the Pittsburgh Pirates in seven games. It would be the last postseason series of Frank Robinson’s playing career. After that year, Robinson would become somewhat of a nomad in baseball, going from the Los Angeles Dodgers in 1971 to the California Angels in 1973 and 1974 to Cleveland in 1974 until his playing career ended following the 1976 season. Despite his many moves, Frank Robinson still managed to play well and was even an All Star in that chaotic 1974 campaign. But his body was aging and he felt a desire to coach more than play, so he retired. Frank Robinson was inducted into the National Baseball Hall of Fame and Museum in 1982.

He had actually begun his managing career in 1975 as Cleveland’s player/manager. As a result, he became the AL’s first African American manager. His teams in Cleveland weren’t very good and he barely missed out on winning as many games as he lost, going 186-189 in three years. Following the 1977 season, Frank Robinson was fired from Cleveland and he would spend the next three years coaching the Angels and the Orioles. He returned to the manager’s perch with the San Francisco Giants in 1981, making him the first African American manager in the NL’s history. The results were much the same as they had been in Cleveland, with Robinson missing the playoffs each year that he was with the organization. He was fired following the 1984 season.

Frank Robinson was hired to be the Orioles manager in 1988 but they never made the playoffs in any of his four years with the franchise. After spending more than a decade away from the game, Robinson was hired to be the Montreal Expos/ Washington Nationals manager in 2002. While they never made the playoffs, they still gave Robinson the only two winning seasons of his managing career. His contract was not renewed after the 2006 season and he left the game for good. Frank Robinson passed away from bone cancer on February 7, 2019. 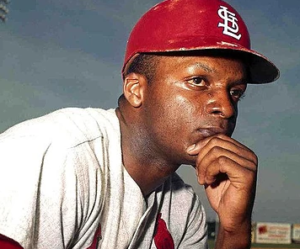 Beginning in 1963, Curt Flood earned a Gold Glove each year of the remaining decade. After six years of missing the All Star roster, Curt Flood was finally invited to the All Star Game in 1964. He collected a career high 211 hits, scored 97 runs and batted .311 as his Cardinals team tore through the schedule on their way to the World Series. There they would defeat the Yankees in seven games with Flood contributing six hits and three RBI.

1967 was a very special year for the Cardinals but Curt Flood was not as effective as he had once been, hitting half as many home runs as he had the previous two years. Still, led by star pitcher Bob Gibson, the Cardinals could not be denied their second World Series championship of the decade, this time in seven games over the Boston Red Sox.

The Cardinals were expected to win the World Series the following year after taking a 3-1 lead over Detroit, but the Tigers stormed back and remarkably defeated the mighty Cardinals.

A storm was brewing and a World Series loss would not be the most tragic aspect of Curt Flood’s career. Following the 1969 season, the Cardinals tried to trade Flood to Philadelphia but he refused, challenging the reserve clause which didn’t give players any leeway where they wanted to play. They were essentially bound to their original club in perpetuity unless the club traded them. This had been going on since the beginning of the major leagues and Curt Flood was fed up with the system.

He sued Major League Baseball and its commissioner Bowie Kuhn $1 million and for free agency, an unthinkable term in those days. Although there were a few former players who testified on his behalf, no active players were even at the trial. It was becoming quite clear that no matter the outcome, Flood would most likely be blackballed by baseball following the trial. After he lost the lawsuit, Curt Flood played only 13 games for the Washington Senators in 1971 before the stress and strain of his great legal battle caught up to him and he abruptly retired.

Through Curt Flood’s struggle in the court, the player’s union noticed just how passionately he fought for free agency and decided to pick up the mantle. The union continued to fight the fight that Flood had started and in 1976 made an agreement with the MLB to begin free agency. While Curt Flood’s once promising career was cut short due to his fight for free agency, his effort was not in vain and today ballplayers in all 30 clubs in the MLB have him to thank for being responsible for the freedom that they now enjoy. Baseball was forever changed. Curt Flood passed away on January 20, 1997.