Across Major League Baseball, April 15 has been designated as Jackie Robinson Day in honor of the memory and legacy of the man who broke baseball’s color barrier and helped change the United States.

But Major League Baseball should also recognize the 50th anniversary of the actions of a man who revolutionized baseball’s business model and boldly began the process of setting his fellow players free. 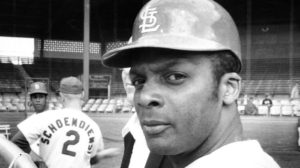 In October 1969, Curt Flood, the St. Louis Cardinals’ star outfielder and a 10-year veteran, was traded to the Philadelphia Phillies. Flood, however, refused the assignment.

It was a decision that sent tremors throughout the sports world.

In a letter to commissioner Bowie Kuhn, Flood wrote: “After 12 years in the major leagues I do not feel that I am a piece of property to be bought and sold irrespective of my wishes.”

Flood challenged baseball’s restrictive reserve clause and the game’s antitrust status. His case went as far as the U.S. Supreme Court in 1972. Although he lost his challenge, Flood made his mark.

“It was an important moment in time because it was the precursor to all the events that took place in the 1970s that brought free agency to baseball,” former MLB commissioner Bud Selig said during a phone interview last week.

Flood’s bold act of resistance transformed the business of baseball. He began the process of emancipation that freed players from the tyranny of owners and set the stage for free agency. His contribution to baseball, although highly debated at the time, is generally recognized as a benefit to players and the game.

“Was it important in the context of baseball history? Absolutely,” said Selig, who believes Flood paved the road to free agency while owners “weren’t quite ready for it in 1970 and 1971.”

The turning point came in 1975 when pitchers Andy Messersmith and Dave McNally won arbitration. That ruling officially ushered in the era of free agency.

But it was Flood who, in my mind, became the Crispus Attucks of Major League Baseball. Granted, the stakes were much higher in the case of Attucks, who lost his life. Flood lost his career.

Few stars of Flood’s day publicly supported him in his decision. A retired Jackie Robinson, however, testified on Flood’s behalf.

One of the most dramatic moments of the trial occurred when Robinson, whose health was declining because of diabetes, walked to the front of the courtroom using a cane. Flood described the moment in his book, The Way It Is.

When Flood told Robinson, “I really appreciate your taking the time and effort to do this,” Robinson replied, “Well, you can’t be out there by yourself.”

“I remember these words very well,” Flood wrote, “ ‘You can’t be out there by yourself and I would be remiss if I didn’t share these burdens with you.’ ”

There was a connection between Flood and Robinson. Bob Kendrick, president of the Negro Leagues Baseball Museum, said, “Those two individuals were quite similar, probably more similar than people have given them credit for. That probably is why you saw Jackie at the trial to give his support. Both were very strong-willed, both were very determined and both had this tremendous self-belief. In both cases, those character traits were put to the test.”

In 1968, Sports Illustrated called Flood the best center fielder in baseball. He started for 10 seasons in St. Louis, including the Cardinals’ World Series-winning teams of 1964 and 1967. Flood was a genius-level defensive player and amassed a 223-game errorless streak. But his greatest contribution to the game was resisting the Major League Baseball power structure and status quo.

I asked Selig if he felt Flood was worthy of induction into the Baseball Hall of Fame.

Former major league pitcher LaTroy Hawkins doesn’t hesitate to say Flood should be in the Hall of Fame as a contributor, at the very least.

Hawkins played for 11 teams in a 21-year career. He was a free agent six times during his career.

Said Selig: “Overall, I think free agency has worked out well for baseball. I know there were concerns about free agency in the 1960s and 1970s, and I think rightfully so. Change always brings concern in anything in life, not only in baseball but overall. But most of this generation and even the past generation have gotten used to free agency. It’s the way of life now.”

Flood was a game-changer. His act of courage in 1969 was one of three significant acts of defiance by black athletes at the time. In 1967, Muhammad Ali refused induction into the U.S. Army; in 1968, Tommie Smith and John Carlos demonstrated on the victory stand at the Mexico City Games. All of those athletes sacrificed their careers to advance the cause of human rights.

While nearly everyone accepts Robinson’s cultural impact on baseball, not everyone is thrilled by the transformation of the business model that Flood set in motion when he said “no.”

This likely may be at the root of some resistance to Flood’s induction.

“Dad took on the world when he did that,” said Shelly Flood, one of Flood’s five children. “He took on some very wealthy, powerful people. He felt as though they were very angry with him, but he felt compelled to do what he needed to do.”

Curt Flood should be in the Baseball Hall of Fame as a contributor and a player. There is a direct line between free agents such as Bryce Harper and Manny Machado in 2019 and the door that Flood opened in 1969.

William C. Rhoden, the former award-winning sports columnist for The New York Times and author of “Forty Million Dollar Slaves,” is a writer-at-large for The Undefeated.