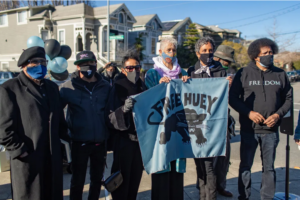 Residents, activists, city officials, and community leaders gathered in West Oakland on Wednesday to dedicate a three-block section of Ninth Street to Huey P. Newton, the revolutionary Black leader who, together with Bobby Seale, co-founded The Black Panther Party in Oakland in 1966. The small stretch of street has been officially renamed Dr. Huey P. Newton Way.

The event, which took place at the intersection of Ninth Street and Mandela Parkway—not far from the spot where Newton was shot and killed in 1989—was organized with support from the Dr. Huey P. Newton Foundation, which was established and is led by Newton’s widow, Fredrika Newton. She was joined at the renaming ceremony by dozens of activists including current and former members of the Black Panther Party. City Councilmember Carroll Fife, whose district includes West Oakland, also attended and spoke.

The street renaming is one of several events this year in West Oakland to honor the legacy of the Black Panther Party, joining a recently unveiled mural dedicated to women of the BPP, and a forthcoming bronze bust of Newton that will be placed in West Oakland.

Amir Aziz is a photographer and videographer from Oakland, California. Using photography as his primary medium, Amir documents life and times in his community and the rapid changes in his environment. He's covered music events and social justice movements in the U.S. and abroad for local and international publications. Before shelter-in-place, he traveled to over 10 countries producing multimedia projects juxtaposing the experiences of locals elsewhere to those in his hometown of Oakland. Amir hopes to continue to bridge the gap between African diaspora communities and oppressed groups in the world through multimedia storytelling.