Geoffrey Pete was reluctant to ask for help. The namesake proprietor of Geoffrey’s Inner Circle has weathered many a storm since he opened the doors to his storied downtown gathering space in 1993, but the pandemic proved more intractable than even gentrification or the grinding struggle with Oakland city officials whom he says disparately target Black-owned night spots. 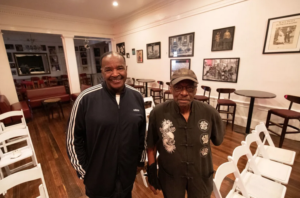 “No revenue coming in, imagine that,” Pete said, in explaining why only weeks before California gave the green light for businesses to reopen he finally okayed a GoFundMe campaign. “I had to be leaned on. Yoshi’s did it and raised a substantial amount. I had to be lobbied and leaned on and I finally did it.”

Though still far from the quarter-million-dollar target, the campaign has garnered considerable support and now stands at about $40,000. More promising is the news that Pete is relaunching the Sunday night jazz sessions at Geoffrey’s Inner Circle on August 1 with the return of veteran vibraphonist Yancie Taylor and a top-notch band featuring vocalist Azure McCall. And yes, the soul food buffet is also back.

The Centers for Disease Control and Prevention and the State of California now recommend indoor masking for vaccinated and unvaccinated people due to the spread of the COVID-19 Delta variant. 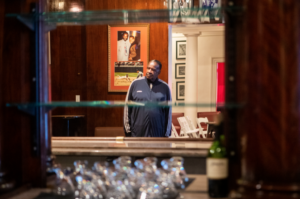 Mr. Pete in one of the halls of Geoffrey’s, with many plaques and photographs of Black artists and musicians.

“We had so much talent,” Pete said. “Don Cornelius came to see Rosie Gaines there. Prince came to see Derek Hughes, Freddie Hughes’ son and signed him. It was like a farm team.”

Listening to Pete reminisce about the early-80s scene makes it easy to understand why he became determined to open his own space. He didn’t just want to run a nightclub. He sought to create “a cultural center for African-Americans to be proud of,” he said.

He found an ideal location at 14th Street and Franklin, where the elite, whites-only, all-male Athenian-Nile Club had been headquartered for eight decades (a history of the building by Joan Tarika Lewis on the venue’s website includes photos from 1953 of Athenian-Nile Club performing a minstrel show in blackface). The building’s handsome facade didn’t hint at the ornate interior, which was inspired by an ancient Egyptian temple.

After leasing the building for a few years he purchased it in 1997, which is one reason that Geoffrey’s Inner Circle has survived when kindred venues were shuttered by rising rents and conflicts over code enforcement and policing. With Sweet Jimmie’s, Mingles, Simone’s, Bluesville, On Broadway, Zazoo’s, and @Seventeenth, Geoffrey’s was once part of a bustling Downtown club scene that catered to a Black clientele, but it’s the last of those venues standing.

For Pete, transforming what stood for decades as a bastion of Oakland’s business elite into a showcase for Black culture was a sweet reversal. The recently departed comedy great Paul Mooney was something of a presiding spirit, performing nearly three dozen times over the years as part of an expansive roster of veteran and rising comedians. 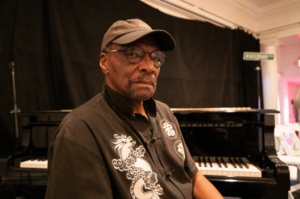 But more than providing entertainment, Geoffrey’s has served as a community cornerstone for gatherings of all types. “The place is a landmark,” Taylor said. “Geoffrey’s makes everyone feel comfortable. It’s not a nightclub. It’s a social place. Minors can come in. There are a lot of social events, memorials, birthdays, celebrations, any kind of activity.”

Before the pandemic, Taylor had led a Sunday session at Geoffrey’s for six years where younger players could sit in after the first set and gain invaluable experience rubbing shoulders with veteran cats. But feeling the wear and tear after decades of carting around a heavy, bulky instrument, he almost gave up the gig.

“I was going to quit completely, but word got out among the regulars and they got pissed off,” he said. 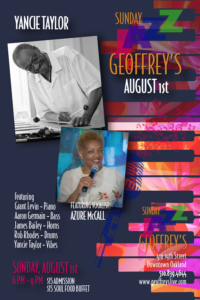 He cut back on his schedule and kept the sessions going. These days Taylor is wearing a wrist brace to deal with arthritis and recently bought a MalletKat, an electronic vibraphone that weighs less than 20 pounds. On Sunday he’ll be focusing on melodies and leaving the bulk of the solos to his estimable band featuring pianist Grant Levin, bassist Aaron Germain, drummer Rob Rhodes, and saxophonist James Bailey. Among the vocalists who’ll be performing on coming Sundays are Carol Stallings, Terrie Odabi, and Brenda Vaughn.

Pete’s ready to get back to entertaining, but he’s not rushing things. He’s planning for a grand reopening event at a date to be determined. But even as he sees brighter days ahead for Geoffrey’s Inner Circle, Pete continues to feel a cold breeze from the city’s establishment.

“I wouldn’t say things are better,” Pete said. “For African-Americans, gentrification is just one instance behind our exodus. It’s not friendly for us. It hasn’t embraced us. The city has been the chief architect of our departures.”