The landslide decision means board President Gabriela López and members Alison Collins and Faauuga Moliga will officially be removed from office and replaced by mayoral appointments 10 days after the election is officially accepted by the Board of Supervisors.

The new board members are likely to take office in mid-March. The three were the only school board members who had served long enough to be eligible for a recall.

The recall divided the city for the past year, with a grassroots effort of frustrated parents and community members pushing for the trustees’ removal over the slow reopening of schools during the pandemic and the board’s focus on controversial issues like renaming 44 school sites and ending the merit-based admission system at Lowell High School.

Supervisor Hillary Ronen said she wasn’t surprised by the results.

“We faced the hardest time of our entire lives as parents and as students in public schools and this Board of Education focused on issues that weren’t about dealing with the immediate crisis of the day, and they didn’t show the leadership that that was necessary and that parents needed to hear, and that kids needed to hear,” said Ronen.

At least a hundred recall backers had gathered in the back room of Manny’s Cafe in the Mission District on Tuesday night.

“This is what happens when you try to rename the schools in the middle of a pandemic!” exclaimed David Thompson a.k.a “Gaybraham” Lincoln, an SFUSD parent dressed in head-to-toe rainbow drag and towering platform shoes, who described his persona as a form of protest. “We wanted to show the diversity of the community behind this recall. I knew they were going to say, ‘Oh isn’t it just a bunch of Republicans?’ and I’m like, do I look like a Republican?”

Within the next few weeks, Mayor London Breed is expected to appoint replacements to finish out the commissioners’ terms, which end in early January 2023. To remain in office, the replacements would have to run in the upcoming November election, but would have an edge as incumbents.

“The voters of this city have delivered a clear message that the school board must focus on the essentials of delivering a well-run school system above all else,” Breed said in a statement. “There are many critical decisions in the coming months — addressing a significant budget deficit, hiring a new Superintendent, and navigating our emergence from this pandemic ... The school district has a lot of work to do.”

Breed did not indicate who might be in the running to replace any of the board members or when she would make the appointments. 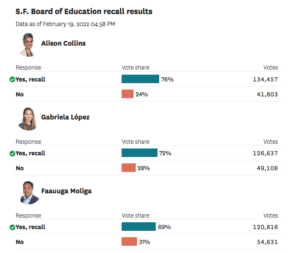 Collins, López and Moliga are the first elected officials in the city to be recalled in recent memory. The last time a recall effort made it to the ballot was in 1983, in a failed attempt to remove then-Mayor Dianne Feinstein from office.

They would all be eligible to run again in November or future elections. López and Moliga did not rule out the possibility Wednesday, while Collins did not respond to the question in her first statement since the election results were posted.

“We now know what it costs to buy an election in San Francisco,” she said, in a statement, referring to the nearly $2 million raised in the pro-recall effort. “This is a backlash against progress, similar to what we are seeing nationally. No matter what, we will continue to fight for the children and families most in need, for our vision of a multiracial democracy, and for our public education system—we’re still here and we are not giving up.”

Moliga said Tuesday that his team “fought hard and ran a great campaign.”

He also thanked “the Pacific Islander community for standing up and taking on this challenge. There are many more fights ahead of us.”

The recall drew support from a wide range of city officials, including Breed, state Sen. Scott Wiener, state Treasurer Fiona Ma, as well as current and former supervisors and school board members.

“That is incredible,” shouted Siva Raj, one of the parents who had been leading the recall campaign, to a cheering and hollering crowd of attendees at Manny’s. “Thank you, and thank you San Francisco for making this happen. For fighting for our children.”

“We need the Board of Education focused like a laser on stabilizing our schools, keeping them open, and supporting students and families in the most effective way possible,” he said in a statement. “With the recall now behind us, I look forward to the mayor making three strong appointments to the Board of Education.”

“Parents have spoken, parents have been heard,” Meredith Dodson, co-founder of the S.F. Parent Coalition, said on Twitter.

Asheesh Birla, a recall volunteer who has an eight-year-old and an 11-year-old, said he was hoping to see a replacement board member who would balance equity with stronger educational outcomes. “We lost sight of the fact that this is about education, and putting the kids’ education first,” he said. “We got lost in renaming the schools...all sorts of other agenda items, and didn’t take into account that schools are about education.”

Kit Lam, a recall volunteer and SFUSD parent who also works for the district, said the replacements should ideally bring the fractured educational community together.

“I’m looking for a commissioner who will listen to parents, who is willing to do the work to rebuild the trust,” said Lam, who added that he wanted commissioners to focus on learning loss and emotional harm.

Volunteers took to the streets and farmers’ markets a year ago to collect signatures as hundreds contributed money to the campaign. Later deep-pocket funders from San Francisco’s business and tech communities signed on, many of whom have fought against progressive reform efforts in the past. 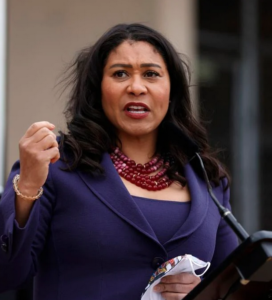 As of Monday, the pro-recall organizers had pulled in nearly $2 million, a jaw-dropping amount for a school board election. The opposition had raised $86,000, including $47,000 specifically donated to keep Moliga in office.

Opponents of the recall, including the teachers’ union, described the effort as an attempt by billionaires to take over the school board, an attack on three people of color as well as a waste of money, given the upcoming election.

The teachers’ union said in a statement Tuesday that it was calling on Breed to “appoint pro-public education replacements.”

Board of Supervisors President Shamann Walton slammed the recall as being driven by “closet Republicans and most certainly folks with conservative values in San Francisco, even if they weren’t registered Republicans.”

“Trump’s election and bold prejudice brought a lot of that out, even in our Democratic and liberal city,” he told The Chronicle in the days before the election. “There are a lot of people who do not want people of color making decisions in leadership, even though the voters said that is what they want.”

The commissioners who faced the recall are among six people of color on the seven-member school board.

Supporters said the recall had widespread support in the city.

“While a few large contributions came from investors, nearly 2,000 individuals have donated to this campaign, and approximately 84% of them live in San Francisco,” said Marie-Jose Durquet, a former district teacher whose own children attended city schools. “People from all walks of life desire a school board that behaves responsibly and delivers a quality education for children.”

Swahili's bid to become a language for ...