Swahili's bid to become a language for all of Africa

With more than 200 million speakers, Swahili, which originated in East Africa, is one of the world's 10 most widely spoken languages and, as Priya Sippy writes, there is a renewed push for it to become the continent's lingua franca.

"It's high time we move from the coloniser's language."

This is not part of a rousing speech by a pan-African idealist but rather the sentence is uttered quietly and calmly by Ghanaian Swahili student Annabel Naa Odarley Lankai.

But her words echo declarations by the continent's visionaries down the decades.

Africa should "have something that is of us and for us", the 23-year-old adds.

In its heartland, Swahili and its dialects stretch from parts of Somalia down to Mozambique and across to the western parts of the Democratic Republic of Congo. 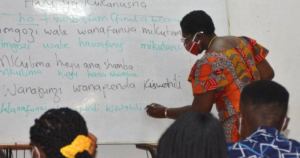 But Ms Lankai's classroom at the University of Ghana in the capital, Accra, is some 4,500km (2,800 miles) west of Swahili's birthplace - coastal Kenya and Tanzania.

The distance could be seen as a measure of the spread of the language and its growing appeal.

And Swahili words and phrases, transmitted through the music of stars such as Tanzania's Diamond Platnumz, are now being more widely heard in Ghana, Ms Lankai says.

Despite the language's higher profile she remembers that her "friends and family were confused when they heard I was studying Swahili". But in addition to her idealism, Ms Lankai thinks that knowledge of the language will help her get a job following graduation.

After the UN's cultural organisation, Unesco, recently designated 7 July as a world day for the language, she may have a point.

Swahili, which takes around 40% of its vocabulary directly from Arabic, was initially spread by Arab traders along East Africa's coast.

It was then formalised under the German and British colonial regimes in the region in the late 19th and early 20th Centuries, as a language of administration and education.

And though it has been spoken about before as an alternative on the continent to English, French or Portuguese as a lingua franca, or as a commonly understood language, there is now a renewed impetus.

At its recent heads of state meeting, the African Union (AU) adopted Swahili as an official working language.

It is also the official language of the East African Community (EAC), which DR Congo is poised to join.

In 2019, Swahili became the only African language to be recognised by the Southern African Development Community (SADC). Shortly after, it was introduced in classrooms across South Africa and Botswana.

Some linguists predict that Swahili's reach in Africa will continue to expand.

Tom Jelpke, a researcher of Swahili at London's School of Oriental and African Studies, argues that as connections grow across the continent, people will want a common way to communicate.

He believes that its closeness to other languages in east and central Africa will cement its position there. But beyond those regions there may also be an ideological element.

"Swahili… comes [with] a sense of ownership," says Ally Khalfan, a lecturer at the State University of Zanzibar, echoing the views of Ms Lankai. "It is about our property and our identity as Africans." 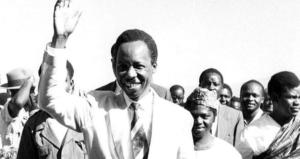 The idea of Swahili as a pan-African language was pushed in the 1960s by Tanzania's first President Julius Nyerere, who used Swahili to unify his nation after independence.

Despite this post-colonial vision and the current boosted status of Swahili there has to be a dose of realism.

European languages are still dominant throughout the continent - and it will take a big effort to shift that.

"English is still the language of power," says Chege Githiora, a linguistics professor in Kenya, in recognition of the political and economic reality.

He advocates what he calls "fluent multilingualism" where people are comfortable speaking more than one trans-national language.

But whereas Swahili has an appeal in east, central and southern Africa, it has more competition in the west and the north.

Arabic is dominant in the north, but in the west there are African languages - such as Hausa, Igbo and Yoruba - which could vie for the status of lingua franca.

If Swahili is to become truly pan-African it will take political will, an economic imperative and financial investment to reach all regions.

"When Swahili was first taught in Ghana in 1964 it got significant support from the University of Dar es Salaam, but this was not sustained," says Dr Josephine Dzahene-Quarshie, a Swahili professor at the University of Ghana.

"If East Africa does more to promote the learning of Swahili in other regions we could get somewhere, but I don't foresee it as a lingua franca for the whole continent."

Nevertheless, her students in Accra, such as Ms Lankai, will carry on dreaming and learning as it holds both an idealistic and practical appeal.