The NFL has hired former U.S. Attorney General Loretta Lynch to defend it in a bombshell racial discrimination lawsuit filed earlier this month by former Miami Dolphins head coach Brian Flores, who was one of the few Black coaches in the league.

Lynch, a partner at Paul, Weiss, Rifkind, Wharton & Garrison, was hired as counsel on the case along with Brad Karp, the chairman of the law firm, Bloomberg Law first reported Wednesday.

Lynch, the first Black woman to be appointed attorney general, led the Justice Department for the last two years of the Obama administration.

The NFL confirmed to HuffPost that it had retained Paul, Weiss to represent the league and the teams named in the suit, and that Lynch and Karp would lead the defense.

The law firm has had a long-running relationship with the NFL and has represented it on multiple occasions, Bloomberg reported. 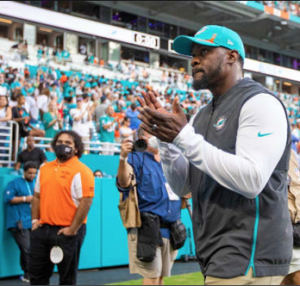 Flores, who was fired by the Dolphins in January after leading the team to a 24-25 record over three years, filed a class-action lawsuit against the NFL and three teams ― the Dolphins, the New York Giants and the Denver Broncos ― over what he says are their racist hiring practices.

He alleges that the league discriminates against Black coaches, denying them positions as head coaches, and that Black candidates who do receive those positions do not receive equal compensation or employment conditions.

Flores also accused the Giants and Broncos of having him in for “sham” interviews to satisfy the NFL’s policy that every team with a head coaching vacancy must interview at least two minority candidates for the role. He also claimed that Dolphins owner Stephen Ross offered him $100,000 per loss for the team in 2019, with the goal of intentionally tanking for a better draft pick.

The NFL has described Flores’ accusations as being “without merit,” though it announced it would investigate the claims about Ross paying for losses.

The NFL has repeatedly come under fire for its lack of Black leadership and head coaches in a league where 70% of players are Black, and has also been criticized for its mistreatment of Black athletes.

Swahili's bid to become a language for ...