The 2022 midterm elections present a serious threat to the freedom and autonomy of Washington, D.C., as House Republicans want to limit the city’s governance if they win in November.

House Minority Leader Kevin McCarthy (R-Calif.) and Rep. James Comer (R.Ky.), the ranking member of the House Oversight Committee, which has jurisdiction over the District of Columbia, earlier this month both suggested a renewed focus on limiting the city’s ability to govern itself if they win power. 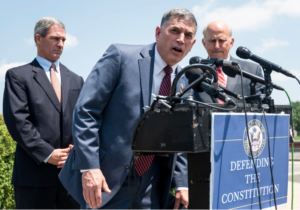 Going even further, Rep. Andrew Clyde (R-Ga.), a member of the Oversight Committee, told The Daily Caller that he is working on legislation to entirely strip Washington of its autonomy by repealing the 1973 D.C. Home Rule Act. The Home Rule Act allowed an elected mayor and city council to set policy for the District’s residents for the first time in the city’s history.

“It’s absurd,” Del. Eleanor Holmes Norton (D-D.C.) said about the proposal to strip the District of home rule. But, she added, it’s also “the kind of threat that I simply have to take seriously.”

The District of Columbia, home to 700,000 Americans, is not a state and, despite the Home Rule Act, is still subject to interference by Congress. As the city became home to a large Black population following the Civil War, Southern segregationists in Congress sought to limit the city’s autonomy while imposing Jim Crow rules on its population. That desire to squash the city’s independent governance remains in the contemporary Republican Party.

Even if a Republican-controlled Congress approved it, a bill to eliminate the District’s home rule status would need to surpass the Senate’s filibuster threshold, which remains intact. It would also need the signature of the president, something Joe Biden would not provide. But that it even exists suggests that many congressional Republicans are eager to expand the anti-democratic wave of restrictive voting laws the party has passed in states to the District. And D.C. — a favorite punching bag for Republicans angry that the city is governed almost exclusively by Democrats — could sit at the forefront of those efforts, with its lack of statehood leaving it vulnerable to lawmakers its residents don’t elect.

Republicans claim their desire to strip the District of autonomy or limit its law-making powers stems from the rising homicide rate, the increase in homelessness and the imposition of COVID-19 restrictions. But homicide rates have risen in urban and rural communities across the country during the pandemic; homelessness has increased in places where housing costs have skyrocketed due to a limited supply of homes; and the District just announced an end to both its mask and vaccine mandates for private businesses. 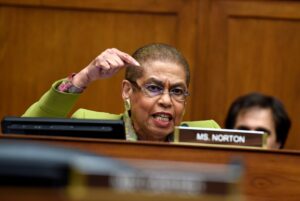 But Holmes Norton, who has served as the District’s non-voting representative in Congress since 1991, believes Republicans have a more nefarious motive for targeting the nation’s capital.

“My only notion about how something as absurd as this could come forward is that they see how close we’re getting to statehood,” she said.

For the second time in 50 years, the District is making a realistic push to become the country’s 51st state. The House passed a bill to make D.C. the 51st state in the previous and current sessions of Congress. A companion bill in the Senate is now supported by all but four members of the Senate Democratic Caucus.

D.C. residents broadly support the push: In 2016, 85% of voters favored a referendum on statehood, which would grant full representation, voting rights and governing autonomy to the nation’s capital and the people who live there. A majority of D.C. residents are Black or Latino, and the statehood push, activists argue, is an important aspect of broader Democratic efforts to bolster civil and voting rights in the face of Republican efforts to implement new voting restrictions and other anti-democratic measures in states nationwide.

While a statehood bill must ultimately clear the 60-vote filibuster threshold in the Senate and two Democrats oppose changing the rule, support for filibuster reform has become a default position among Democratic Senate candidates. This means the filibuster’s end is a question of when, not if.

For statehood advocates, Republican proposals to attack the city’s autonomy are just further evidence of the need to get out from under the thumb of Congress and become the 51st state.

“If the GOP overturns home rule, we’ll lose the little autonomy we currently have over the District’s basic functions: schools, safety, reproductive rights, COVID protocols, and so much more,” said Jamal Holtz, lead organizer of 51 for 51, a pro-statehood group. “We can’t continue living in fear of the whims of a white member of Congress from thousands of miles away. The only remedy to protect the 700,000 Washingtonians in perpetuity is to make D.C. the 51st state.” 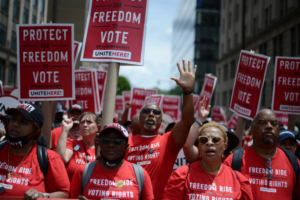 In a statement, Patrice Snow, the communications director for D.C. Vote, said: “The announcement of their anti-democratic plot also demonstrates the movement to enfranchise the 700,000 tax paying American citizens in Washington, DC through Statehood is loud, proud, and working successfully toward its goal.”

This isn’t the first time Republicans floated the idea of stripping D.C. of home rule. In the late 1990s, House Republicans talked about doing just that after Congress imposed a financial control board on the city to get control of its finances during Marion Barry’s second term as mayor. Norton sees the current attack on the city as “​entirely different from” the proposal in the ’90s, as the city is currently running a budget surplus (rather than the deficit it ran under Barry).

Many D.C.-based activists also regard statehood as a question of when, rather than if. And in response, congressional Republicans who’ve failed to make legitimate counterarguments against statehood itself are resorting to an all-out attack on the ability of District residents to govern themselves.

“Their call to rescind the Home Rule Act moves beyond the typical game of using DC residents to score cheap political points at home and into a racist attack on the fundamental right to representation,” Snow said.

“All Americans deserve the freedom to vote, the freedom to govern ourselves and the freedom to determine our own destiny. It’s only because of our lack of Statehood that these Representatives feel empowered to deny those freedoms and engage in the racist subjugation of American citizens.”