A former Minneapolis police officer charged in George Floyd’s killing testified Wednesday that he deferred to Derek Chauvin because he was his senior officer and that’s what he had been trained to do.

J. Alexander Kueng is one of three former officers charged in federal court with violating Floyd’s constitutional rights when Chauvin pressed his knee into Floyd’s neck for 9 1/2 minutes as the 46-year-old Black man was handcuffed, facedown on the street. Kueng knelt on Floyd’s back, Thomas Lane held his legs and Tou Thao kept bystanders back. 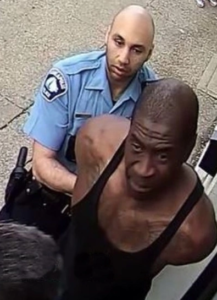 Kueng testified that he was concerned about their inability to stop Floyd from thrashing around as they tried to arrest him after police responded to a 911 call about Floyd using a counterfeit $20 bill at a corner store. He said that when Lane suggested changing the restraint, Chauvin disagreed.

“He was my senior officer and I trusted his advice,” Kueng said.

All three officers are accused of depriving Floyd of his right to medical care. Kueng and Thao are also accused of failing to intervene to stop Chauvin in the May 25, 2020, killing that triggered protests worldwide and a reexamination of racism and policing.

Defense attorneys contend the Minneapolis Police Department provided inadequate training and taught cadets to obey superiors. They have also said that Chauvin, who was convicted of state murder and manslaughter charges last year, called the shots that day.

Kueng and Lane were both rookies, just a few days off of probationary status. Kueng agreed with his attorney, Tom Plunkett, that cadets are taught unquestioned obedience and that probationary officers can be fired at will.

Plunkett asked if that was something he ever worried about.

Kueng testified about responding to the 911 call and how he and Lane handcuffed Floyd and struggled to try to get him into their squad car. He said he had dealt with strong people in training, but never someone as strong as Floyd. 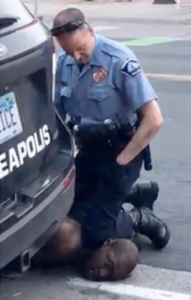 Derek Chauvin pressing his knee on George Floyd's neck for many minutes, an act which killed Floyd

“It felt like at any moment he could just shove me off,” he said.

By the time Chauvin and Thao arrived, Kueng said he was “pretty stressed out” and was worried the presence of Chauvin, who had been one of his field training officers, meant he was doing something wrong. He said it was his experience was that he should defer to his superiors.

Kueng recalled checking Floyd’s wrist for a pulse after he was facedown on the street, and said he told Chauvin he couldn’t find one. He said it was up to Chauvin to check Floyd’s neck for a more accurate pulse and to make decisions on the “difficult balance between scene safety and medical care.”

Earlier, Thao took the stand for a second day, testifying that he knew Floyd’s pleas that he couldn’t breathe were becoming weaker, but still did not realize Floyd was in danger even as bystanders became increasingly vocal.

Under cross-examination by prosecutor LeeAnn Bell, Thao said he did not relay any of the onlookers’ concerns about Floyd’s well-being to the other officers, and did not check his pulse after bystanders asked him to. He said he was relying on the other three officers at the scene to care for Floyd’s medical needs while he controlled the crowd and traffic and that he didn’t think Chauvin’s knee was on Floyd’s trachea.

The prosecutor also asked Thao what steps officers took to help Floyd. He replied that they were waiting for paramedics. She also asked if he ever told Chauvin to get off Floyd. 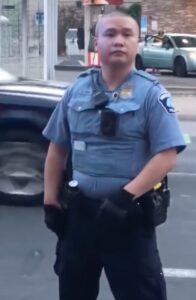 “I did not,” Thao replied, adding later that, “I think I would trust a 19-year veteran to figure it out.”

Thao’s attorney, Robert Paule, asked his client why officers thought it important to keep Floyd restrained and Thao said they believed Floyd was in a state of “excited delirium” — a disputed condition in which someone is said to have extraordinary strength — and needed medical care from paramedics “that we were not capable of doing.”

Thao also agreed with the prosecutor that when he called for a more urgent paramedic response, he knew it was “life or death.” Bell asked if he radioed back to tell them he suspected excited delirium or that Floyd was not talking or unconscious, and Thao said no.

Lane is also expected to testify.

Lane, who is white; Kueng, who is Black; and Thao, who is Hmong American, also face a separate state trial in June on charges alleging that they aided and abetted murder and manslaughter.

Chauvin, who is white, pleaded guilty in December to a federal civil rights charge.