Home›News›'Bel-Air' Team And Cast 'Taking Risks To Be Authentic, Modern And Transparent'

'Bel-Air' Team And Cast 'Taking Risks To Be Authentic, Modern And Transparent'

Almost three years after Morgan Cooper's viral trailer took the internet by storm, Bel-Air, the drama series reimagining of The Fresh Prince of Bel-Air, is debuting to the world.

Set in "modern-day America," the series is "imagines the beloved sitcom The Fresh Prince of Bel-Air through a new, dramatic take on Will’s complicated journey from the streets of West Philadelphia to the gated mansions of Bel-Air. As these two worlds collide, Will reckons with the power of second chances while navigating the conflicts, emotions, and biases of a world far different from the only one he’s ever known."

"In terms of my process for creating, it always just comes from striving to make something honest...[that's] what it really boils down to," Cooper told us. "And so, you can never reboot The Fresh Prince of Bel-Air. What they did and how they did it is in a time capsule, and they caught lightning in a bottle, and to even try to do anything like they did would be disrespectful because you just can't do it. And so for me, it was really all about reimagining these characters and the spirit of who they were and grounding them in modern-day life and saying to myself, what is an honest portrayal of what 2022 Carlton would look like now, given the circumstances of Will's arrival? It was really just about approaching it from an honest lens." 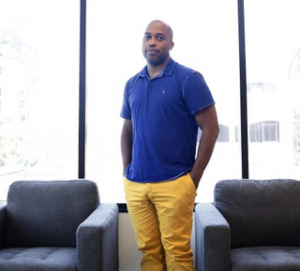 Newson explained, “I mean the actors are coming into these roles that were portrayed by people in a way that’s really indelible, right? So people have a very strong feeling for who Uncle Phil is. And so there’s already a comparison waiting. There’s already a sort of baggage that comes with [these] roles. We didn’t want actors who had to also fight against type based on other projects they’ve had. We want you to love Aunt Viv. We don’t want you to be looking at the actress and going, ‘Oh, I hated her on that one show, she was the one who..,etc.’ We couldn’t have all of that sort of clouding it.”

“The biggest obstacle was our own kind of fear of screwing it up I think,’ added Brady. “I mean, like most artistic obstacles, a lot of them are in your own heads. It was our fears and worries. It was the fears and worries of executives and everyone else who loved the original and knew what an iconic show the original was. And Morgan’s trailer was a guiding light. We could look at that and say, we do it like that, [but] it pays homage without trying to rip it off or become a parody of itself. And when we got Will Smith’s endorsement and buy-in, his sort of enthusiasm and support of the project allowed us to lift that fear off of our back. If he, the Fresh Prince himself, was supportive of this vision and tone and story we wanted to tell, that I think went a long way into giving us the confidence to move forward to tell the story this way.” 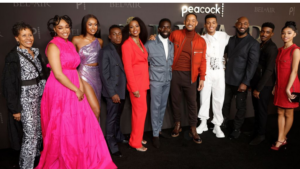 “I just wanted to be as authentic as I could be because you can’t fill his [James Avery’s] shoes,” said Holmes. “All I can do is really just follow the blueprint that he left the best that I can and be as authentic as I can be and just make this a tribute to him. But to be here, honestly, we’re all just beside ourselves. And I wanted to just really tap into today’s issues as has been written in the scripts and so that the character that I play is very grounded and just supportive as James was and just very loving. We create a very loving space on this show."

“I keep saying, it’s like I didn’t know this was on the menu to even ask for, for a dream,” said Freeman. “So I appreciate someone bringing this up for dessert. For Vivian, those women [Janet Hubert and Daphne Maxwell-Reid] are tattooed on my brain, so I just wanted to make her as grounded as possible and also relatable. I mean, this auntie is the queen of all aunties in the TV universe, so what would that mean today? And I think that’s what we were all trying to do.”

“We take a lot of risks in these storylines just to be authentic and to be modern and to be transparent,” said Jones. And I think that’ll be a pleasant surprise for the people watching because whatever preconceived ideas they have about the show, it’s really nothing like them. I’m just excited for people to see storylines that would have them a little shocked. I know me personally, I’m shocked by my storyline.

Sholotan added, “I keep saying [to] treat this like a different show. It is such a different show and it might as well be called something else, but just the characters are [their] names, you know what I mean? But it’s a very completely different show.”

Following Sholotan and Jones, Akbar saiid, “I feel like a lot of people kind of can compare it to the original The Fresh Prince of Bel-Air, but it’s literally not the same. It’s just the same characters. You’re just digging deeper into bigger issues and basically opening up their journal and finding out what they’re really about.’

The first three episodes of Bel-Air dropped on Peacock Feb. 13, with the remaining episodes for the season dropping weekly.