Without question, this past year has been unlike anything any of us have faced before. But each day, we try our best to put those feelings of fear and uncertainty aside in order to trudge forward and provide for our families.

Contrary to popular belief, despite the extravagant trappings of a lifestyle most of us will never experience, NBA players are no different. But for Portland Trail Blazers superstar Dame Lillard, as he explained in a revealing feature over at The Athletic, the despair can sometimes be too much to bear.

“I thought about (not playing),” he admitted while discussing a recent game against the Lakers. “Because mentally I was like […] I don’t want to say I didn’t care, because I did care. But emotionally, I was like, whatever.”

In the past 18 months, the six-time NBA All-Star has endured an unfathomable amount of tragedy. He was the first to discover the dead body of his cousin and personal chef, a friend of the family was lost to COVID-19, one of his aunts succumbed to cancer, and recently another cousin was killed in his hometown of Oakland. 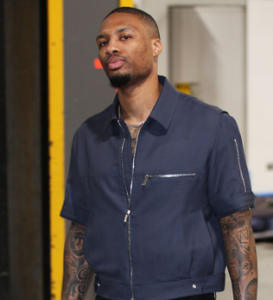 And as if that wasn’t enough to test the boundaries of anyone’s spirit, last Thursday, the day before the aforementioned Lakers game, he lost two people in his inner circle to gun violence.

Logo Lillard would push through and drop 35 points and seven assists on the Lakers to keep his injury-ravaged team (21-14) afloat in the Western Conference playoff race, but much as he has for far too long now, he did so with a heavy heart.

Sadly, he’s also acutely aware of what’s at stake. Because should his play suffer as a result of all he’s going through, it could jeopardize his career and eventually return him to the same environment that he fought so hard to escape from.

“I have to put those emotions to the side to care about the game and make sure I’m here for my teammates, and to do my job, because my job takes care of a lot of my family,” Lillard said. “It does a lot of things for people in my family. I think understanding that is what helps me kind of push forward.”

At the same time, however, trauma doesn’t care about any of that stuff. It haunts us; it stains our memories and emotions.

“I stood over his body, man. Like, he was dead,” he said about his cousin and personal chef, Brandon Johnson. Lillard found him on the kitchen floor at Johnson’s home last May. “People don’t know what type of trauma that is, and what that is to have somebody that close to you laid out and you stand over him. Like, I still struggle with that. You know what I mean? Like, I still struggle with that. That’s a battle for me.”

The entire story over at The Athletic is gut-wrenching, but it offers a fascinating glance into the soul of a man who’s world-renowned for his stoic nature. It also humanizes one of the greatest athletes in professional sports and serves as a reminder that NBA players are much more than just a jersey number.

They reserve the right to be human, too.

“A lot of people don’t know, because I don’t seek sympathy, I don’t make excuses. I just show up,” Lillard said. “I think there’s a lot of people who don’t take into consideration that we have lives, too.”