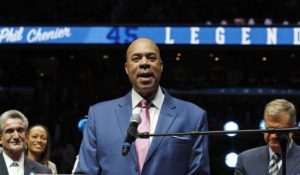 On the newest banner that hangs from the rafters at Washington's Capital One Arena, a small microphone - embroidered with a white 33 - is subtly stitched into the bottom left corner.

You'd barely notice it was there; Phil Chenier certainly didn't.

Chenier, who had his #45 jersey retired tonight during halftime of tonight's Wizards-Nuggets game, didn't even notice the mic, added to signify his three decades as a broadcaster with the team.

"I had no idea there was even a mic on it," Chenier said, laughing. "I'll have to go back out and look at it some more." 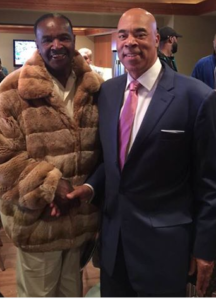 Despite the Wizards' 108-100 loss, the night was first and foremost a celebration of Chenier - the 5th player in franchise history to have his number rasied in the rafters. He joins Earl Monroe, Elvin Hayes, Gus Johnson, and Wes Unseld as the only players to achieve the honor so far.

"To be up there with the other 4 names means a lot – people I had the fortune of playing with," he added. "I remember my first day of practice and I had just watched this team play in the finals and now I’m plopped down with Wes Unfeld and Earl Monroe and Gus Johnson. It seemed like they accepted me from the get go."

Many from that 1978 Championship team were in attendance on Friday night, watching as one of their teammates cemented his professional legacy. For Chenier, that acceptance as an All-Time Bullets great is at the core of why he played the game.

"You know, when you play this game, you play for acceptance," he said. "You want to be the best, you want to be accepted. Having players and childhood friends – and of course, your family – here, you’re surrounded by so many people that meant a lot to you both before and now. It’s a really humbling feeling.”

It was hard to find someone in DC without something good to say about Chenier on Friday night. Even in the basement of Capital One Center, after the Wizards' fifth loss in seven games, head coach Scott Brooks took a moment out of his press conference to praise Chenier.

"[Chenier] is a great ambassador and we all love him," Brooks said. "It's well deserved. It's going to be pretty cool seeing his jersey every time we step into this building."

"You don’t know what the emotions are going to be..." he told media members after the ceremony."...Obviously it’s something I thought about, but it really was exciting to see the 45 up there and my name."

Then Chenier cracked a smile.