LaToya Renee London was born on December 29, 1978 in San Francisco, California. Her mother and stepfather brought her up in Oakland, California. At the age of 4, LaToya already expressed great interest in singing and by the age of 7 gave her first public performance at her mother's wedding. From there, she continued to pursue her career in singing and even became a member of the Oakland Youth Chorus for three years when she was a teenager. She graduated from Skyline High School in 1997 and went on to sing for a Christian rock group while working as a waitress and bartender. She was singing lead for the band All-Star Jukebox when she decided to audition for season 3 of American Idol. 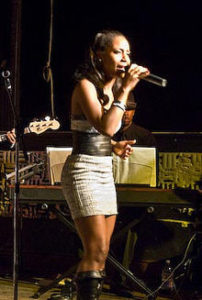 LaToya went to Los Angeles in order to audition for season 3 of American Idol and had no trouble impressing the judges with her beautiful voice and charming personality. When she made it to the semifinals, her rendition of Eric Carmen's "All By Myself" garnered her high praises from all three judges, with Randy and Paula even giving her a standing ovation. It came as no surprise when it was announced that she made it to the Top 12. LaToya came on strongly during the Finals, captivating the audience and the judges with her renditions of "Somewhere," "Ain't Going Down 'Til The Sun Comes Up," "Ain't Nobody," "Ooh Baby Baby," "All The Time," and "Don't Rain on My Parade." However, to a surprising turn of events, LaToya London found herself being eliminated on the tenth week, to the obvious dismay of the judges, including Simon Cowell, who previously predicted that other contestant Jasmine Trias would be the one to go home next.

LaToya's elimination did not stunt the growth of her popularity. After the show, she went on to do many things, including launching her first album, Love & Life, in 2005. Her album received positive feedback from several newspaper and magazine critics, and placed 82 on the Billboard Top 200 Albums chart and 27 on the Billboard Top R&B/Hip-Hop Albums chart. Her subsequent singles, "Every Part of Me" and "State of My Heart," were well-received as well, with the latter making it to #40 on the Billboard Adult Contemporary Tracks Chart and #5 on the Friday Morning Quarterback's Adult Contemporary spin chart. She has also stepped onto the world of acting as well, having landed a lead role in the musical Beehive and having been cast as Nettie in the stage musical version of The Color Purple.