Esther Mabry, owner and namesake of legendary Esther’s Orbit Room in West Oakland, where blues greats such as B.B. King, Lowell Fulson, Al Green and Etta James played, died peacefully in her sleep in late May, 2010. She was 90.

The passing of Mabry brings to an end the last physical connection to West Oakland’s heyday as the “Harlem of the West Coast,” said guitarist and music historian Ronnie Stewart of the Bay Area Blues Society.

“Let’s face it, Miss Esther was the icon, and her death closed the book on an era that was very productive for West Coast Blues,” said Stewart, who has worked for many years to establish an Oakland Blues Walk of Fame along Seventh Street. “Her club was extremely important for live music. The last few years it had turned into a favorite watering hole, but she still had the best jukebox on Seventh Street, full of great blues songs.” 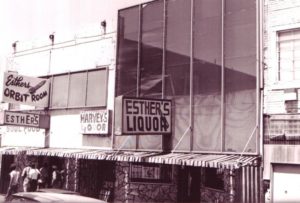 Esther Brown was only 22 when she left Texas to follow a friend to Oakland. She worked as a ticket clerk for the Oakland Mole, but it was not long before she landed a job as a waitress at Slim Jenkins Supper Club on Seventh Street, one of dozens of hopping jazz and blues clubs and black-owned businesses that lined both sides of the bustling commercial district before BART and the U.S. Postal Service moved in and wiped most of it away.

Mabry saved her tips and opened her first place, Esther’s Breakfast Room, in 1950. It was a popular gathering spot for cabdrivers and shift workers at the shipyards, rail yards and Alameda Naval Air Station. That’s where her husband, William, worked when he first wooed her.

The couple bought the building in 1959 and expanded to offer cocktails and live music in 1961. The Orbit Room opened in 1963.

Daddy O Gibson was the first band to play at the Orbit Room, said Jay Payton, a comic, musician and dancer who served as the club’s first master of ceremonies. Other great acts followed: Charles Brown, Lou Rawls, Bobby “Blue” Bland, Ike and Tina Turner, to name a few. Payton said that Mabry was classy, tireless, and always finding ways to promote the music and show her customers a good time. They remained close friends, speaking two or three times a week. 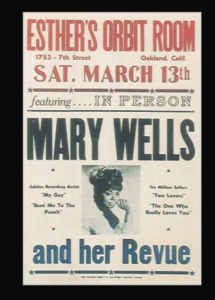 “She was a great lady, a great, great lady, and she did a lot for people, too,” Payton said. “We put on a big event for her on her 55th anniversary, I was looking at the flyer just today, bringing back some memories. A lot of people are going to miss her.”

Payton said Mabry was ahead of her time.

“You could come down and order your dinner in the showroom, and the waiter would come to your table and toss your salad. She stepped it up, took it to another level,” he recalled.

Mabry was forced to relocate her club to the east side of Seventh Street when the government started construction on the post office in 1973. Other music spots did not survive the disruption, and eventually the Orbit Room was the last one standing.
The Mabrys cultivated a loyal following, from politicians to musicians to sports fans and regulars who often spent more time there than at home. They hosted bus trips to Giants and 49ers games and sponsored college scholarships through the California Package Store and Tavern Owners Association.

After William died in 2003, Esther kept it up, often working nonstop through the day and night.

The hard work took its toll, and eventually her health failed, to the point where she once collapsed inside the club and had to be carried out on a stretcher. She joked at the time that folks didn’t think she would be back; of course, she was. In 2005, she was feted by her longtime customers and friends and musicians who celebrated Mabry’s 55 years on Seventh Street.

Mabry’s health problems persisted to the point where she had to rely on others to run the Orbit Room. Her nephew, Danny Collier, finally closed the doors early in 2009.