Reid's has been around longer than its 57-year-owner has. It was founded in 1945 by Mel and Betty Reid in the basement of a duplex on Sacramento Street. 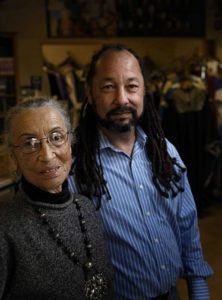 "The African American population in the Bay area quadrupled because of the war effort. And what they call race music became popular. Jazz and blues became popular," says David Reid. "My parents started the first African American music store west of the Mississippi carrying all kinds of music. My parents listened to Duke Ellington, jazz, religious music, R&B, everything."

Today, Reid's occupies a larger building next door to the basement shop where it began, but it has narrowed its focus to a single genre: Gospel. And you'll find fewer records and CDs on the shelves. Instead, the shop has become what Reid calls "A one-stop store for the African American church experience: everything from music, print music, books, bibles, offering envelopes, choir robes, pulpit robes."

Reid attributes that change to the shifting realities of the music industry, but also the history of his store and family. In Reid's early days, Mel's uncle Paul was a DJ, spinning religious music on the local station KRE. "So he and my father would promote gospel musicians, bring them to town for performances," Reid says.

The store thrived, with gospel artists like James Cleveland stocked next to jazz, soul and funk masters like Marvin Gaye, James Brown and Wes Montgomery.

"As we got into the 50s and 60s, things changed," Reid says. "We got Tower records and such. Before, our competition was other black stores, and then corporate America decided that this music could make money."

As Reid tells it, restricting the store's stock of records to Gospel was simply practical. "We decided instead of competing with corporate stores like Tower and Music Factory and Rasputin and all the big stores, let's limit what we carry to gospel, because that's something they mostly weren't concerned with. So from the late '70s to beyond, we became a black gospel store."

Some of those stores that helped to push Reid's out of the secular music market are now closed, victims of reduced demand for CDs and the easy availability of most pop music on the Internet. That shift has hurt Reid's too.

"The bulk of my customers are 45 years and older," Reid says. "Young folks aren't buying music on CD any more. They're buying it 99 cents at a time over the Internet or they're sharing files."

The neighborhood has changed, too. Reid says that the generation of African American residents of the Bay area that grew up alongside him have mostly left the city for the suburbs. "It used to be a thriving economic base," he says. "Now, as far as black-owned businesses, I think I'm the only one on this street."

Still, Reid says that gospel offers benefits that pop and hip hop don't. "Because of the genre I carry, the effects of the wave are probably later for me," he says. "I'm probably at the end of the crest. Pop and rock and rap have probably crashed on the shore. My clientele are older and they want to touch and feel and have an actual CD."

Those are, for the most part, new CDs. Reid says that except for some out of print vinyl that's never been on cassette, let alone CD, he doesn't like carrying used discs. "If I don't support the artists that are making the music — even though I know that most of the dollar goes to labels or distributors — then they won't be able to make more music."

But fewer major musicians are making gospel records today, he says, and many of the great records of the past are now out of print.

"It's a whole genre of music that's leaving us," Reid says. "The thing that concerns me most is the amount of music that's not being put out. If it's not a million dollar seller, it's probably sitting in a vault somewhere. Not everyone can be Kirk Franklin or Yolanda Adams."

Still, as gospel's artists have moved out of the mainstream spotlight, the diversity within the genre has grown. "It used to be either you had Thomas Dorsey or Mahalia Jackson," he says. "Now you have every genre of music inside gospel."

And there are still records that can bring bodies into Reid's.

"The form that sells to everybody is traditional," Reid says. One of his best-selling albums of the last couple of years, he says, is a tribute to the late Bishop G.E. Patterson. Reid says the CD, which came out last spring, has continued to sell well ever since. "All the top gospel acts on one label, on one CD, doing a tribute to Bishop Patterson ... it just keeps going and going and going." Not unlike the store itself.

A Brief History of Baseball in Oakland

A History Of Reid's Records