Note: the following article was published in the Mercury News five years ago, just before the 65th annual holding of the Charles Reid Christmas Party in Richmond, California. This year, the Charles Reid Foundation celebrates the 70th anniversary of the party, to be held at the Richmond Police Athletic League Community Center, 2200 MacDonald Avenue, Richmond on Sunday, December 17, noon to 5 pm. Unfortunately, one of the main Reid family members who steered the Christmas Party events in the last several years will not be present this year. Charles Reid's grandson, Todd Lewis, passed away peacefully at his home in Contra Costa County early this year. He will be missed. 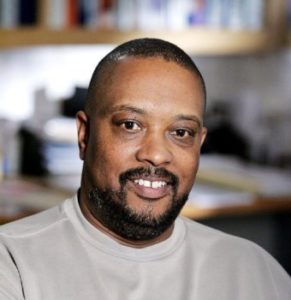 RICHMOND — The family behind the city’s longest-running seasonal tradition, the Charles R. Reid Memorial Christmas Party, say they are returning to their roots when they open the doors to families on Sunday at the Richmond PAL gymnasium, 2200 Macdonald Ave.

For 65 years, the event has provided gifts and good cheer to families in need, and the number of households needing assistance is greater than ever, said Todd Lewis, a grandson of the late Reid and one of the directors of the Charles Reid Foundation.

The party began in 1947 as a neighborhood celebration hosted by the late Reid for children in impoverished North Richmond, where he was a recreation director. Children attending the early parties were given a decorated stocking filled with fruit and small treats. To honor those origins 65 years later, “We’re going back to the tradition of giving Christmas stockings,” Lewis said. “It was one of the mainstays of the party for at least the first 20 years.” 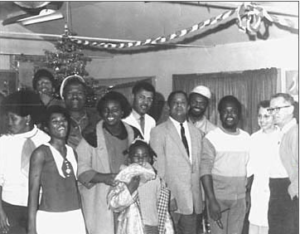 Charles Reid (center) at the first Christmas Party in 1947

The stockings will be in addition to the toys and other surprises, including drawings for new bicycles, that have been a hallmark of the event more recently.

The party and giveaway have grown into a citywide event now held downtown and, judging from the requests for assistance, could be the biggest held to date, Lewis said. “There’s a commitment, and we’re going to continue it.”

This year, the foundation has seen an uptick in interest in soccer among children, and professional players will be on hand to autograph soccer balls that will be given out.

Retired players from the National Football League Alumni Association attend and lobby for the honor of playing Santa Claus.

Individuals, groups and sponsors have responded with donations to help the foundation meet the rising need in a tough economy, he said, adding, “It really says a lot about the people of Richmond that they really want to get so involved and help. I can’t say enough about them. It’s really a good feeling.” 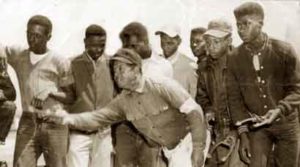 Charles Reid showing youth his horseshoe-tossing techniques at Shields-Reid Park in North Richmond. The park was originally named Shields Park, but the Reid name was added in tribute to Charles Reid's long work as director of the park.