Home›Oaktown Sound›Philthy Rich: From Seminary Avenue To The Big Time

Philthy Rich: From Seminary Avenue To The Big Time

Blacklisted: How The Oakland Police Department Discriminates Against Rappers and Music Venues 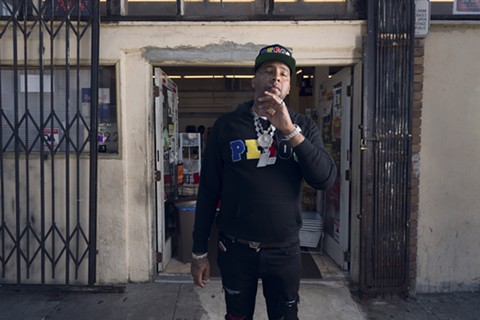 But on the day before his November 18 gig at downtown nightclub Vinyl, venue owner Oscar Edwards says an Oakland cop visited him personally to tell him that Philthy’s show, advertised for weeks, was a “problem.”

Abruptly, Edwards and Philthy called it off. It was a familiar situation: Edwards said the department edits and censors local hip-hop lineups “all the time.”

For Philthy, it was a costly disappointment. He’d flown in three guest performers, put them up in hotels, and chartered a van with a driver and a security guard to bring everyone to the club. Philthy’s manager, PK (for Prashant Kumar) estimated the loss to be approximately $10,000.

“There’s no way it wasn’t malicious,” PK reckoned of the department’s motive. “‘Let’s let him set up the show — and then cancel it at the last minute.’”

From a December 7, 2016 interview by Noisey.com

Philthy Rich is an East Oakland street and rap veteran who grew up in a Bay Area slum ironically named Seminary. But there, he wasn't being prepared for ordination. Growing up, he moved through ranks and not holy orders. In third grade, his mother kicked him out of the house, and throughout his adolescent years, he rotated his living situations between the home of an elementary school teacher and various shelters and jails. But he never stayed in one place too long. In August 2012, after being shot three times, Philthy drove himself to the hospital and vaulted the next day. Ultimately, the streets adopted him, but due to his transient nature, he navigated those dangerous paths towards rap. Now, any rapper that comes through the Bay comes to get Philthy's blessing. 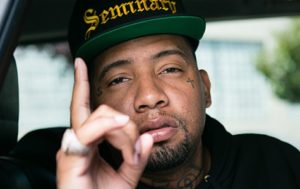 His methodology for success seems fail-proof. First, his work ethic is staunchly competitive; he has released more 50 albums in the last ten years. Second, his marketing approach is strategic. His new project, Hood Rich 4features artists from, "Detroit, Texas, Chicago, Los Angeles, Washington DC, Miami, New Orleans, and New York," because according to Philthy, "I like to do music with people where I have a buzz at." And third, his approach is grounded. Philthy only collaborates with artists he genuinely appreciates, declaring that although, "most everyone on Hood Rich 4 has a buzz, it's not about the buzz, it's just about the talent."

We met up with Philthy in connection with the recent release of Hood Rich 4 and had the opportunity to speak with Philthy, accompanied by his manager PK, about the blurry concept of "leaving the streets," and Philthy's transition into rap. He also provided his ethical views on creating rap music and the accompanying movement, titled "Real Niggas Back in $tyle." Finally, Philthy spoke on his predecessor Jacka, who was a big influence on Philthy and the rap game in general.

During the interview, it was initially difficult getting Philthy's attention away from his cell phone and even after that, his responses were brief and nondescript. It is fair to say, until my ball-the-questions-up-and-interview-from-the-heart-moment, Philthy was disengaged. Afterwards, Philthy let his guard down. Ultimately, Philthy is a sensitive soul, inspired to pursue music in order to raise his two kids, since he was not fortunate enough to have a father or similar parental figure. Although Philthy's status as a Seminary soldier is undisputed, in this conversation, he's a Seminary Samaritan by giving some tough love guidance for upcoming artists trying to leave the streets and make it in rap.

Noisey: Since you've been in New York City, have you had a chance to check out the Statue of Liberty?

Noisey: I wanted to talk you to about the opaque concept of "leaving the streets." In a VLAD TV interview, you mentioned that 2006 was a critical year for you due to some wise words from Keak Da Sneak. Could you provide a little more detail about that time?

Philthy Rich: I told one of the older guys from my neighborhood that I wanted to rap. And he had a relationship with Keak. He reached out to him and said "Philthy wants to rap [and] I need y'all to rock." Keak said, "Philthy got to leave to block alone. He's got to give either one 100 percent."

At that time, I ain't have no job. I didn't have anybody behind me or giving me any money. So, I had to still be in the streets to take care of what I had going on family wise and music wise. That's why I was catching the cases or whatever. I had to figure out a game plan of what I needed to do to leave it alone.

Noisey: What was the game plan?

Philthy Rich: It started when I was giving 50 CDs to a store and got to a point where they could be taking up to a 1000 CDs and paying me upfront. That's another thing with the music: the more you put out, the more you get paid. I don't understand rappers who drop one CD a year. I put out as much as I can to get a bigger check. Why wouldn't you? It's like if you go to work this many hours and you ain't got nothing else do with your free time, so you could get time and a half, but you ain't gonna go? I'm gonna go and get that extra money, period.

Noisey: And for the artists with one foot in and one foot out? 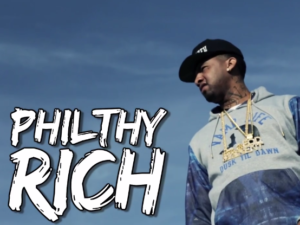 Philthy Rich: They are not full-fledged behind their craft yet. They put a CD out and say, "OK, I'm popping in my city," but it doesn't stop there. You aren't popping nowhere else.

Noisey: What does it feel like when you are in that transitional stage?

Philthy Rich: I had to think to myself, "I will be trapped; dead or in jail. I've got to do something bigger than what everybody else is doing." I've got two kids. I don't want to be locked up for the rest of my life and have them grow up without a daddy. I didn't grow up with a daddy. And I don't want to die and leave them to fend for themselves and have somebody else raise them. So I had to do something to provide for them and be here for them.

Noisey: Tell me about your movement—I'll call it Real Dudes Back in Style.

Philthy Rich: At that time, everybody was just getting behind fads; anything to get popping. Where'd all the real niggas go? They were just doing whatever was in just to sell themselves and get a buzz. That's were my mind was at when I came up with the name of the tape. Because I am like where are their morals? You've got to know what you are really doing this for. Because at the end of the day you've got to answer to that.

Noisey: Are you talking about musical styles?

Philthy Rich: Musical styles, clothes, and all types of stuff. It was just weird at one point. There were no real rappers really rapping about the trap, the hustle, the struggle and all that stuff. It was just dancing, and shaking ass type shit. So I was confused as to what was really going on. Like, I've got to do this now to be able to fit in?

Noisey: PK, I see you've got a Jacka hoodie on. Paul Wall had some kind words about Jacka in a previous interview I did with him. 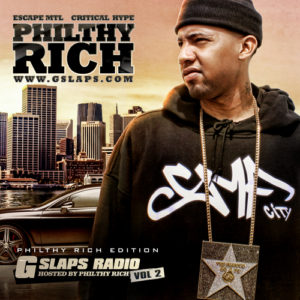 Philthy Rich: PK was Jacka's manager, and he was the one who connected me with Paul Wall. The song I did with Paul Wall and Freeway was a dedication to Jacka. I knew Jacka and he was a good dude. He did this before me, so I always try to pay homage and respect to the ones that came before me.

He was never one of the ones that got lost with the music, with the fads and the trends; he always kept it real and true to his self and that was genuine and a special trait that he had. I've seen a lot of people go from this to this to that—fast—just to fit in. They are so lost with themselves that they don't know how they want to rap. They want to rap like this person over here because that is what everybody is listening to, instead of just being yourself. By him passing that was a big loss for the Bay, a big loss for the streets, and the struggle, period. It was deep with Jack.

Noisey: "Throwback Thursday Everyday" is a track on Hood Rich 4 . What does that mean?

Philthy Rich: "Throwback Thursday Everyday" is for these people that get on Instagram and post "remember when I was doing this, remember when I was doing that…" You know what I am saying? What are you doing now? This social media can make anybody be somebody they are not and there are a lot of people who misuse social media. I feel that they have been lying to themselves so long that they believe in their own lies.