Home›Acknowledging›The nation’s oldest park ranger is also a singer-songwriter, and now she has a musical

The nation’s oldest park ranger is also a singer-songwriter, and now she has a musical

"Every single word of every single song I've ever written is right in my mind," said Betty Reid Soskin, 100. —

As Betty Reid Soskin listened to recordings of herself singing her own compositions, she kept her legs gingerly crossed, her fingers knit tightly together. But as she mouthed along with the lyrics, recorded decades ago, she tilted her face toward the sky and arched her eyebrows, the way singers do when they’re making an offering or blissfully communing with the muses.

“I’ve forgotten so much since the stroke,” said Soskin, who turned 100 in September and suffered a stroke in 2019. “But every single word of every single song I’ve ever written is right in my mind.”

Most of Soskin’s fans know her as the nation’s oldest park ranger, working at the Rosie the Riveter/World War II Home Front National Historical Park, amplifying the vital contributions of Black people to the war effort amid overt and state-sanctioned racial discrimination. She even recently had an El Sobrante middle school renamed for her. Fewer know her as a singer-songwriter, but that’s starting to change.

On Saturday and Sunday, Oct. 16-17, an early, 30-minute version of “Sign My Name to Freedom: The Unheard Songs of Betty Reid Soskin” premieres as part of San Francisco Bay Area Theatre Company’s New Roots Theatre Festival. The musical, by Jamie Zimmer, shares a title with Soskin’s 2018 memoir and with a forthcoming documentary film directed by Bryan Gibel.

Zimmer, who uses gender-neutral pronouns, first found out about Soskin’s music when they were hired to perform a song of hers, “Brown Skinned Heart,” at a Community Music Center event in 2018. The pair connected, and Soskin started writing Zimmer emails about her songs. 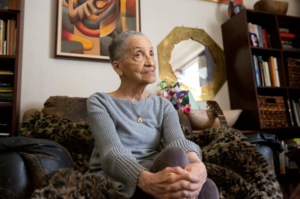 Betty Reid Soskin said she got record contract offers long ago, but she had four children at the time, one with a disability.

“She would pick out each paragraph of her music and describe what it meant and the context for the story,” Zimmer recalled.

Now a 23-year-old graduate of the California Jazz Conservatory, Zimmer started to wonder how to get Reid Soskin’s music to a wider audience.

“This music is too potent and politically current to stay in storage,” they said. “I just started pitching the idea to people.”

SFBATCO was the first company to bite. But Zimmer had only three of the songs, and Soskin couldn’t help as much after the stroke. They found the lyrics to more on Soskin’s blog, CBreaux Speaks, which offers a searching, penetrating look at a complicated life. Here and there over the years, Soskin wrote essays on her musical output.

“She would write a documented story about what she was going through at the time and what came out of it,” Zimmer said. “She could be talking about the Vietnam protests and her son being drafted, and then following that story would be a song.”

Betty Reid Soskin, listening to her music at her home in Richmond, thought long ago that her songs were too personal to matter to others.

But those entries offered just text, no melodies or chords.

Gradually, Zimmer gathered the lyrics to 15 songs. Then Soskin put Zimmer in touch with her friend Joanna Haigood, who eventually became the musical’s associate choreographer.

“Joanna had this trove of songs that I did not have access to, like recordings of Betty’s, Betty herself singing,” Zimmer said. Years ago, Soskin “would go to colleges, and someone recorded them.” The tapes had been kept unheard in a closet for decades.

Even now, Soskin, Zimmer and filmmaker Gibel, with whom Zimmer later started collaborating, are the only people who have heard some of the recordings.

A week before the musical’s premiere, Zimmer met Soskin at her modest Richmond home to listen to a few of them.

“Blackness and the white of me
Are just the day and night of me
And not the wrong or right of me.”
— Betty Reid Soskin, “To Each of Me” 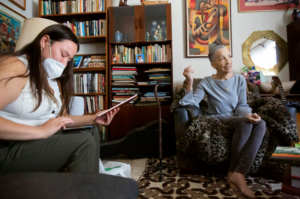 Betty Reid Soskin (right) and Jamie Zimmer listen to some of Soskin’s original songs at her home in Richmond.

“When I wrote that song,” Soskin said while listening to “To Each of Me,” “it was when I discovered I could sing things that I couldn’t say. If I’d said it, it would make no sense at all.”

Soskin’s chord progressions pique the ear, and once she even uses a very unusual nine-beat meter, Zimmer noted.

“I don’t think I ever wrote anything that took more than 15 minutes,” Soskin said. “They came out whole and never changed.”

Her singing voice has a jazz chanteuse’s firelight warmth and a protest singer’s sting.

“I think,” Soskin said, pausing to look up, “I’m good. I didn’t realize it then.” But listening now is like hearing someone else’s voice, she said. “I’m hearing them as the second or the third person, and that is something most people don’t have the chance to do.”

She wonders why this stranger, her younger self, didn’t sing professionally. That younger Betty got record contract offers, she said. But at the same time, she knows the answer: She had four children, one with a disability.

Plus, she thought her songs were too personal to matter to anyone else. And “when I first started writing them, I thought I was remembering other people’s music,” she said. 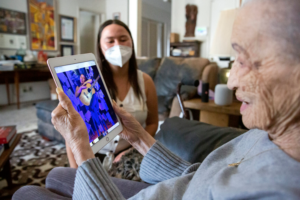 Betty Reid Soskin looks at photos of Jamie Zimmer’s art installation that is part of the show “Sign My Name to Freedom.”

After listening to the mournful ballad “Brown Skinned Heart,” Soskin said, “That song brings up so much for me.” She recalled the circumstances of its writing, from back when she and her family lived in Walnut Creek.

“I was having my coffee. My youngster ran in. He wanted to know why they were throwing stones at him,” she remembered, noting that while her son was coming home from the grocery store, teenagers driving by attacked him. “And I couldn’t answer, because I didn’t know why.”

Her “Ebony the Night” could almost be a companion piece to “Brown Skinned Heart.”

“I remember feeling so good when I wrote that song because I couldn’t find anything black that was beautiful,” she said. “I wrote that for children. Kids needed to see black and beauty at the same time.”