Home›Acknowledging›Betty Reid Soskin reflects on her life and career as a singer, activist and ranger

Betty Reid Soskin reflects on her life and career as a singer, activist and ranger

At 98 years old, she is the oldest Ranger with the National Park Service at the Rosie the Riveter National Park in Richmond, California. 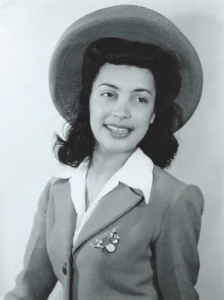 Born in Detroit in 1921, she's made the most of her opportunities. She has written a memoir, spoken word albums and autobiographical songs which reflect her most painful and joyous moments. Soskin has worked with the Black Panthers in the suburbs around Diablo Valley and as a file clerk in a segregated union hall in Richmond during World War II. Soskin gives historical talks about her life at the Rosie the Riveter National Park's museum, telling stories of her experience as a Black woman in America.

Soskin suffered a stroke in September of last year and has since been reflecting on her life and the lives she has touched. A documentary on her life titled “No Time to Waste—The Urgent Message of Betty Reid Soskin” produced in association with the Rosie the Riveter Trust aired earlier this month, which focuses on Soskin's mission “to restore critical missing chapters of America’s story,” according to the Rosie the Riveter Trust website. In a phone interview with USA TODAY, Soskin talks about her life and what she is most proud of.

Can you tell me about your early life and how it has influenced you over the years?

Soskin: I think that when you’re 98 years old, the last thing you have knowledge about is your early life —I’m not sure how it figures in my current life—I am who I am as a result of my being "early Betty.” My early life has pretty much spelled out who I am today. That pretty well describes all of us. 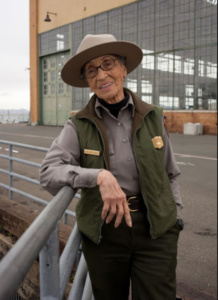 Can you tell me about your work with the national park service?

Soskin: That has been rather remarkable. I have worked for 16 or 17 years, I suppose. I went to work at 85, which was already kind of an odd thing. My work has consisted mostly of getting together with people who are of interest and doing shows that lasted for an hour.

What has your role in the fight for racial justice been like?

Soskin: I suppose that’s gone on for all of my life. I don’t know when it started and I don’t even know when or if it ended. It has been constant. I have worked with mostly myself. I was not connected to anyone except the Black Panthers and my church. I don’t know if I thought I was working against injustice as much as it was simply something that took up most of my days. I was living in the suburbs with my family as the only black person in the suburbs at the time. The fact that I was working against injustice is incidental to the fact that it was mostly a part of my life. I was doing it without knowing what I was doing. For the most part, it was pretty exciting, I think.

What kinds of things have you lived through that could provide perspective on our country's moment relating to the Black Lives Matter movement?

Soskin: Oh, good heaven. I think that if I were to answer that, I'd have to go at it from as many angles because they’re all asking the same question. I think that everything I’ve lived through connects to the Black Lives Matter movement.

How do you remain hopeful in times that require a critical look at how the country has treated Black people over the course of history? What kinds of things are important in keeping up the momentum?

Soskin: I’m not sure that I’m always hopeful. There are times certainly when I fail that quest for hopefulness. For the most part, I remain hopeful because I’m sure there are others out there working on the same thing. And one of us will some day make it. The people in the streets are now multiracial and that's different, that means that the question is no longer there for me as a black person, it now involves everyone.

In your recent documentary, what is it like to have your story told through that form and why do you think it’s important for people to see it?

Soskin:I don’t know because it took five or six years and because the filmmakers were good friends by the time it was over—I don’t know that I ever saw it as being important. It was simply something that we were all doing. Occasionally, they would show up at the park or take a trip with me and I never really recognized it as being part of a film until it actually came out. Now, I see it and it looks like someone else.

Soskin: I’m not sure why it is. I think it’s the way it is with much of my life now. It doesn’t seem to be really connected. I think that it’s partly because of the stroke.

Going forward, what is something that you’re focused on right now?

Soskin: I don’t expect there to be much more after the stroke. I’m sure that my time is pretty much up but I think I am satisfied that I have lived my life well. I’m sure that the kids will carry on. I’m not sure that I have any expectations beyond today.

Can you talk to be a little bit about that feeling of satisfaction? What are some moments that you’re proud of?

Soskin: I met with the Obamas in Washington, which was probably the high point of my life. It was absolutely unbelievable. I was invited to participate in the tree lighting ceremony and was brought back to Washington with my two granddaughters and participated in that. I look at it now and it seems almost unreal. I think that the first time I sang one of my songs at the Oakland Symphony was more than I would have ever dreamed possible.

Soskin: It was rather amazing. It was something I never had dreamed and it turned out to be wonderful.

What inspired your songwriting over the years?

Soskin: My life, I think. I think that I didn’t ever publish anything. I was writing music as I was going along and I was doing something that I literally could not do. I could not read music but I was writing music and playing by ear. It was rather remarkable. Some of the songs, which are all autobiographical, just spilled out what I was doing at the time. Now, they are as if they were written yesterday. They are so in tune with what is going on.

Could you tell me about those times and what the songwriting process was like?

Soskin: I was going through a rough break. It was an attempt to keep my sanity—and I kept it through music. It was quite wonderful.

How would you align the messages within your songs with the current state of the country as far as the fight for racial justice within the Black Lives Matter movement?

Soskin: I think that I could line up a song or three for each decade. I think that there were victorious songs and there were others that were not. They were painful and I lived them, too.

So you really put yourself into your music. When you look back at your songwriting and your work, how does it make you feel?

Damian Lillard out to show Lakers that ...