The most telling sign of what Damian Lillard had in store to close the NBA bubble seeding games -- and perhaps what will follow starting Tuesday night against the Lakers in the playoffs' opening round -- came in that social media exchange with Paul George.

Former NFL coach Bill Parcells used to say that people tell us who they are, so listen. And Lillard, after George and some of his teammates engaged in that ill-advised jawing, was telling us who he is, and by extension, who his team is, too. Let's listen. 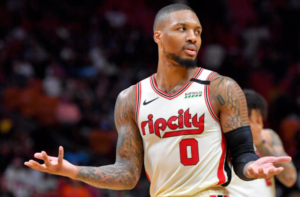 Lillard is the anti-LeBron, a superstar who stays and who, like many NBA executives and team employees around the league, harbors real resentment about how teams like the Lakers build winners the easy way.

That message was clear after Patrick Beverley wrote to Lillard, "Cancun on 3." George pitched in, "You getting sent home this year."

hen Lillard pulled back the veil. On guys that seek out victory elsewhere, and with other stars. On organizations that can, and have, turned being poorly run into success through the sheer luck of mega-talents like LeBron James or Kawhi Leonard choosing them, and then choosing their fellow superstars, tampering rules be damned. On what it must feel like to be a guy like Damian Lillard in a league with so many competitors taking, as he said, the easy and the soft way out.

"Keep switching teams," Lillard retorted, "running from the grind. You boys is chumps."

That's Damian Lillard, the NBA's anti-LeBron, no chump, never soft, disinterested in the easy path. That's Damian Lillard, the guy who stays. That's the Portland Trail Blazers -- never taken as seriously as they should be, never able to recruit the big star or on the receiving end of the league's look-the-other-way player tampering reality -- suddenly healthy, angry and ready to prove they're the rare NBA contender built without the benefit of free agency salvation.

Consider: You have in Portland a team coming off a conference finals appearance last postseason. A team with a top 5-8 player who's at his best in big games, and who just went for 51, 61 and 53 to close out the seeding games and lift them to the play-in. A team with a frontcourt that's gotten healthy. And a co-star, in CJ McCollum, who dropped 14 fourth-quarter points against Memphis Saturday, a reminder of his own big-game ability.

In facing the Lakers in a No. 1 vs. No. 8 matchup, the Trail Blazers have a chance to compete on behalf of the teams who are forced to grind.

It's the perfect juxtaposition for Lillard and Portland. The Lakers, who are coming off six straight seasons without a playoff appearance, are the clear favorites, in this series and against everyone they'll play going forward. That Portland team coming off that conference finals berth, and now tied for the second-longest active playoff streak in the NBA, are huge dogs.

The Lakers were run into the ground before Jeanie Buss wrestled control of the organization's basketball operations from her brother, and even then there were moments like Magic Johnson quitting at a press conference last year without informing the team owner. A paragon of excellence and remarkable chemistry, they are not.

LeBron is on his third team change, and landing Anthony Davis happened because, you know, LeBron and A.D. wanted it to happen. Simple as that. Lillard watched his co-star, LaMarcus Aldridge, leave several years ago for San Antonio. That's when most stars -- ahem, Paul George -- would have tapped out. Dame stayed.

Many NBA stars offer up lip service to the brotherhood of their team and the desire to grind it out together. But very few do what Lillard seems poised to do: Stay, and accept the burden of where he is, with what he has, and the need on and off the court to create what it takes to compete. Without the kind of clear path forward created by being a piece on a superteam coming together because you can.

When those Clippers, beneficiaries of the easy way to glory -- and, maybe, the smart way -- lashed out at Dame, they crossed a line they probably didn't understand. They were lashing out at a way to build a winner that's hard, uncertain, and something each of them have eschewed. 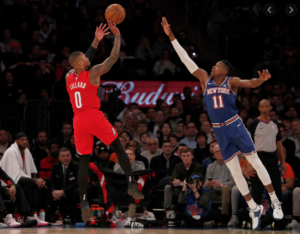 "He's very comfortable in his own skin. But on a protective level he's hyper protective of his family, of his friends, of his teammates. So Damian looks at attacks on him as emblematic of attacks on the franchise as a whole. And as the leader and face of this franchise he takes that personally. It's what he means to the city itself and the culture as a whole. It's not just a personal attack. It's an attack on things far greater than him as an individual."

There's nothing wrong with an NBA player leaving his hometown, or his part of the country, or the team that drafted him. The American Dream doesn't usually come to you -- often you have to go get it. That's true in basketball, too.

LeBron picked his team and his star. Good for him. Kawhi did the same. Kemba Walker finally grew frustrated enough in Charlotte to turn to Boston. While the Warriors built their greatness the way Lillard has tried to, Kevin Durant did not. Now he's trying again with Kyrie Irving in Brooklyn -- after Irving, having forced his way out of Cleveland while they were still contenders, was a net-negative in Boston.

We'll see what Giannis Antetokounmpo does. Maybe the young cores in Denver and Dallas will stick around for the long haul. Boston is homegrown, especially now that Kyrie has exited. San Antonio has shown this path can work, but if you include Durant and the Warriors as the beneficiaries of a star "running from the grind" -- and you should -- then six of the past eight NBA champions got there because of a star who did so.

The league's top echelon is still largely defined by players that, as Lillard said, run from the grind. The Lakers sudden success springs from LeBron choosing them, and then A.D. Same for the Clippers with Kawhi and his handpicked co-star, George. The Rockets got Russell Westbrook in a similar way. The Raptors, while contenders without him this year, are defending champs because Kawhi chose them last year. The Heat have Jimmy Butler, who's now on his third team. And so on.

Chumps? That one's situational, and beautifully aggressive. But there's something refreshing about Lillard and Portland trying it this way, and it speaks -- as Lillard spoke it himself in that takedown of P.G. -- of who Damian Lillard is, what motivates him, and why this Lakers series is as much about the idea of the proper way to win in the NBA as anything else.

Because Lillard told us that guys who run from the grind are chumps, and he won't be one. Lillard has been shaped by being overlooked and working harder than his foes. And that makes him extra dangerous in a series against a Lakers team that represents everything he's not.

"Another element that makes Dame different is his personal path to becoming a first team All-NBA Player," Olshey said. "He was under-recruited out of high school, spent four years at Weber State, had his projected draft range questioned and was handed the ball Day 1 with the expectation he would be the long term starting point guard."

Being overlooked and underestimated. Being the opposite of a guy who cuts and runs. 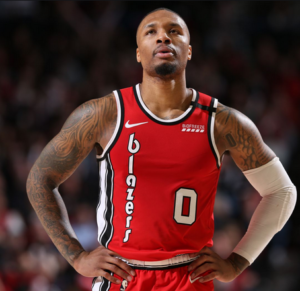 "Damian wears the number zero for Ogden, for Oakland, and for Oregon," Olshey went on. "What takes him to the next level is knowing that responsibility that falls on him. That he can't take nights off. He can't defer."

Can Portland win against the Lakers? Most experts -- including all of ours, including me -- say no.

But the fact Lillard is here at all is for too many who doubted him its own long shot. Those Clippers showed us what motivates Lillard, why he does what he does, why where he does it hasn't changed.

But it's the Lakers who have to try and actually send him home -- while representing everything Lillard resents.

Two teams. Two paths to success. Two utterly different realities in how they're able to go about building an NBA team. And one star who'd love nothing more than to turn the grind into another chump who should have known better.