The nation's oldest ranger is hopeful for tomorrow: 'I get a feeling that change is going to come' —

At age 85, Betty Reid Soskin started a new career. She took a job as a park ranger at Rosie the Riveter WWII Home Front National Historical Park in Richmond, sharing her story and the story of Black women’s and men’s efforts during World War II with visitors who are often familiar with the white “We Can Do It!” propaganda figure — and little else. 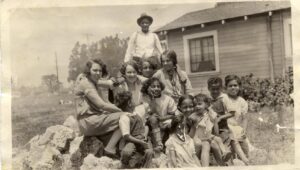 Growing up with her grandfather George Allen (top center) in East Oakland in the 1920's and 30's.

Soskin grew up in Oakland in the 1920s and ’30s, and well before she became the country’s oldest park ranger, she found ways to contribute to her community. She has been a record store owner, a fundraiser for the Black Panthers and a political aide during her “ordinary extraordinary” life.

Now 99, Soskin has used her platform with the National Park Service to educate the public about crucial moments in history and highlight the sacrifices of those whose names are often left out of the retellings. As she approaches her 100th birthday this year, Soskin’s wisdom and courage continues to have a positive impact on California residents and institutions.

This interview is part of Lift Every Voice, a series that connects young Black journalists with Black elders in our communities to celebrate and learn from their life experiences. The San Francisco Chronicle has joined Hearst newspapers, magazines and television stations to publish dozens of profiles as part of the project.

Q: In 2007, at age 85, you became the oldest national park ranger in the country. Why did you feel it was important to share your story with others?

A: I don’t think that I took that going in as being my way to tell my story. I think that the story grew out of living those years; it grew out of the fact that the park was being planned to be an homage to the women who had worked (in the war effort during WWII), and by so doing, it was leaving out so many of the stories that should have been told. 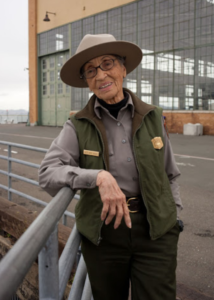 It was my going into those stories around the planning tables (for the park) that I discovered that they were not known. There was the story of 120,000 Japanese Americans who were interned and put into concentration camps. There was the explosion at Port Chicago (in Contra Costa County) that lost 320 (mostly Black) men that had been forgotten. By bringing these stories up, I was able to remind the present people who were planning the park that these people had existed and that there were reasons why they were not recognized. To this day I’m sure that the park is so much more than it ever wanted to be, and that the National Park Service is grateful for it being there.

(During World War II) I worked in a union hall (for Black members). They didn’t have Black members in unions, except that they had to enter this union. The Black men went to work in the shipyard in ’43; the Black women went in ’44. They didn’t start training Black women to be welders until 1944 and ’45. So these pictures that you see with Black women in them date from very late in the war, but no one knew that. The building itself was destroyed when the war ended. So by insisting that they had to include these stories, we were able to bring forth people who would not have been remembered.

Q: How do people react to hearing your story at the park?

A: I was amazed because they were actually grateful for learning. They wanted to know. It was not a case of fighting anyone; it was a case of including everybody and having everybody approving, and that’s, I think, what had surprised me more than anything. Except for the women who had been Rosies. There were about six or eight of them who went along with me, and they acted as if none of this were true. That was the thing I think that got to me most of all, is that there are many truths. There are many truths. We have to somehow make room for all of them, because they are all true.

Q: Two-thirds of park rangers are men, and Black staff in the National Park Service is disproportionately low. Why do you think that is and how can we fix that?

Q: In your book, you write about a family member who passed as white in their workplace. Why was it important for you to embrace being Black and to not pass as white?

Q: Why did you and your first husband, Mel Reid, pick Walnut Creek to build your dream home in 1952 after experiencing redlining in Berkeley?

A: I don’t think that our choosing Walnut Creek to live had anything to do with redlining. I think that it was some place we chose to put our family, and we didn’t realize this would not be accepted. We expected it to be objected to, but we also knew that this would be something that would pass, that we would go through to another side and that our children would not face what we were facing. Mel’s family had built a house with a garden and a couple of horses out in Danville, and we used to take our children to ride the horses and visit their grandparents. We would go by this little lot, and Mel decided that this was where he wanted to be. It was just halfway between where our house was in Berkeley and Danville. That was all we needed to know.

Q: While you were in that area, you raised money for the Black Panthers. Did you view yourself as an activist at the time?

A: No. I don’t think I ever viewed myself as an activist. I was acting, of course, but I was using everything I had according to the times that I was living in, and that’s what the times demanded of me.

Q: You worked for a member of the Berkeley City Council and as a staffer for California Assemblywoman Dion Aroner (D-East Bay) in your 70s. What did you take away from your work in politics?

A: I took away a sense that I could demand to live the life I wanted to live. And by doing so, began to set down the kinds of things that I would accept. I think that is probably what I learned from Dion. Dion was perfect to work with me because she was strong enough as a woman to believe in herself, and by believing in herself she gave me the chance to believe in myself. I worked for her for a number of years. I don’t think she second-guessed me at all.

Q: What has it felt like for you to see the growth of the Black Lives Matter movement and the response to police violence over the past year or so?

A: That has been the biggest surprise of my life. I don’t think I ever expected to see it, but now when I see people marching for justice, they’re all colors. They are Black and white and green and gold, everything. And they’re waiting to be told what to do in many cases. I think that is the most incredible thing that could’ve ever happened. It has only happened in the last five years.

Q: What advice would you give to young people who want to be a part of the change in their generation?

A: I get a feeling that change is going to come. No matter whether or not we want it to. I think that they’ve got to be open to what’s right and ready for what’s to come.