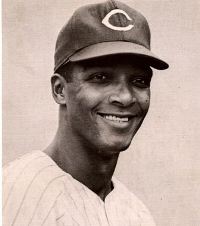 “Vada never got the recognition; he never got any recognition at all. But not one time did I ever hear Vada badmouth anybody about it, never said a bad word. And he was the nicest man I ever met.” – Sparky Anderson on Vada Pinson

Why was Vada Pinson underrated and overshadowed? After all, the star centerfielder of the Cincinnati Reds put up some great numbers in the 1960s, numbers many feel were good enough to put him in the Hall of Fame. Unfortunately, he had the misfortune of playing in an era that featured many great outfielders. Try this on for size. Willie Mays, Henry Aaron, Frank Robinson, Roberto Clemente, Mickey Mantle, Al Kaline, Carl Yastrzemski, and Billy Williams. Each of the aforementioned has a plaque in Cooperstown while Vada Pinson was never more than a blip on the radar. Many feel their presence put him in the shadows. Yet when you look at what Pinson accomplished, you have to wonder why.

If you heard the numbers without any of the peripherals you'd think Hall of Fame or, at the least, very close. In 18 seasons Vada Pinson hit .286, an average not always Hall-worthy. But when you look at the whole picture, things change. He had 2,757 hits, 485 doubles, 127 triples, 256 home runs, 1,169 runs batted in and 305 stolen bases. Along the way he had four 200-plus hit seasons, led the league in doubles and triples twice each, won a gold glove, and rarely missed a game, once playing in 508 consecutive contests. Pretty darned good numbers.

Vada Edward Pinson was always a multi-talented guy. He was born on August 11, 1938, in Memphis, Tennessee, but the family moved to Oakland, California, when he was seven. By the time he entered McClymonds High School, he had not only become a fine athlete but was an outstanding trumpeter in the school band. In fact, he loved music so much that he thought about making the trumpet his career. But his baseball coach at McClymonds, George Powles, who had coached and helped develop Curt Flood and Frank Robinson before Vada, saw the youngster's talent and convinced him he had the goods to become a major leaguer. 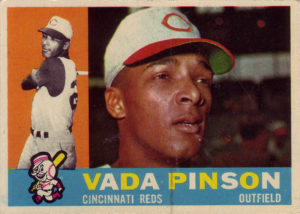 So did the Cincinnati Reds. The team offered Vada a $4,000 bonus to sign even before his 18th birthday. It took just two years in the minors, 1956 and '57, to show he was the real deal. In 1957 with Visalia of the California League, the 19-year-old Pinson hit .367 with 20 homers, 97 RBIs and slammed out 209 hits in just 135 games. So it was no surprise when the Reds invited him to major league spring training the following season and, sure enough, he made the club. He wouldn't turn 20 years old until that August.

Vada wasn't a big man, just 5'11” and 170 pounds. He batted and threw from the southpaw side and was timed running to first base in 3.3 seconds. A natural in centerfield, he'd be joining right fielder Frank Robinson, who had been the Rookie of the Year in 1956 and was already a superstar. Vada went 1-for-5 in the opening game at Crosley Field, then two days later in Pittsburgh, he hit a game-winning grand slam home run in a 4-1 Reds victory. He later said his heroics did more harm than good.

“Probably the worst thing that happened to me was hitting that homer against Pittsburgh,” he explained. “It won the game but didn't do me any good. I started thinking of myself as a slugger.”

By mid-May, the erstwhile slugger had slumped to .194, hadn't hit any more homers and was sent back to Seattle of the Pacific Coast League, where he hit .343 in 124 games. He came back to the Reds in September, had learned his lesson, and hit .412 in the final 12 games of the season, bringing his average up to .271. But that was far from a preview of things to come. It took only until the next season for Vada to show his full talent. 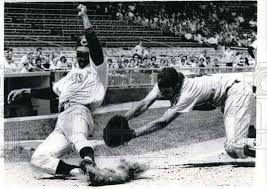 In 1959, the 20-year-old Pinson started in centerfield and played in all 154 games. He led the league with 706 plate appearances and 648 at-bats, as well as in doubles with 47. In addition, he hit .316 with 204 hits, 20 homers, and 84 RBIs while swiping 21 bases. He quickly joined Frank Robinson to give the team a pair of superstars, and it didn't end there. Over the next seven seasons, Vada Pinson was one of the top all-around players in the National League. Unlike so many of today's players, he was out there every day, never injured, and a guy the team could always rely on.

Highlights include the pennant-winning 1961 season, when Vada hit .343, led the league with 208 hits and added 16 homers and 87 RBIs. During the next two years, he had 100 and 106 RBIs, as well as another 200 hit season. In 1963, when he drove in 106, he also hit .313 with 204 hits, a league-best 14 triples, and 22 home runs. He may not have reached the heights of a Mays, Aaron, Robinson or Clemente, but he wasn't far behind, reliable and consistent, and a total gamer. In addition, he forged a close friendship with Frank Robinson. But there were some problems, as Frank Robinson recounted in his autobiography.

“Some writers were reporting that Vada and I formed a 'Negro clique . . . that was gnawing at the morale of the club'. What nonsense. Certainly, Vada and I had been virtually inseparable for five years, but often duos and trios on the team palled around together, and they weren't called clique members.”

Vada and Robby also went against the grain in 1963 when rookie Pete Rose took the second base job away from popular veteran Don Blasingame. Again, Robinson recalled, “I saw that Pete Rose was being ostracized by most of my teammates. I asked Pete one night if he would like to join Vada and me for dinner. No other players warmed to Pete all season, so Vada and I became his friends and showed him the ropes around the league.” 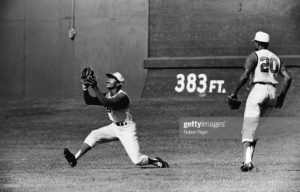 Maybe that's one reason the Reds traded Robinson to the Orioles after the 1965 season saying he was “an old thirty.” The old thirty promptly won the triple crown with the Orioles, while Vada soldiered on with the Reds until 1968. He then started traveling, spending a year with the Cardinals, then two with Cleveland, two more with the Angels and finally two with the Royals until he retired after the 1975 season at the age of 37. He never quite duplicated those years in Cincinnati, but still, more than held his own. His last big year was the 1970 season in Cleveland when he hit .286 with 24 homers and 82 RBIs.

After retirement, Vada was a coach and hitting instructor for several teams from 1977 to 1994, then left baseball for good and returned to Oakland. Sadly, on October 21, 1995, the 57-year-old Pinson suffered a stroke and died. Maybe his early death is one reason he's often forgotten when the best players of that era are mentioned. In the decade of the 1960s, he ranked in the top-ten in games played, at-bats, runs scored, hits, doubles, triples, and stolen bases. He also hit eight grand slams.

I don't know how the analytics geniuses of today would evaluate Vada Pinson's accomplishments or his Hall-of-Fame worthiness, but using the “old-fashioned numbers” here's one to think about. Vada Pinson is just one of two players in baseball history with at least 2,700 hits, 450 doubles, 250 home runs, 100 triples, and 300 stolen bases. The only other player to accomplish that was . . . Willie Mays. And that should say it all about Vada Pinson.