On December 17, 1951, Paul Robeson and William Patterson submitted a petition from the Civil Rights Congress (CRC) to the United Nations. Titled, “We Charge Genocide: The Crime of Government Against the Negro People,” the petition was signed by almost 100 U.S. intellectuals and activists. Robeson led a delegation to present the document at U.N. Headquarters in New York, while CRC Secretary Patterson delivered it to a U.N. meeting in Paris.

W. E. B. Du Bois was scheduled to accompany Patterson to Paris, but the U.S. State Department prevented him from leaving the country. 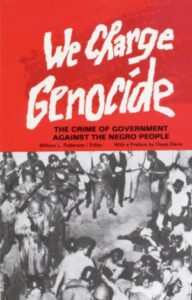 The book-length petition documented hundreds of lynching cases and other forms of brutality and discrimination, evincing a clear pattern of government inaction and complicity.

It charged that in the 85 years since the end of slavery more than 10,000 African Americans were known to have been lynched (an average of more than 100 per year), and that the full number can never be known because the murders are often unreported.

The petition cited the UN’s definition of genocide: “Any intent to destroy, in whole or in part, a national, racial, or religious group is genocide.” The petition concluded therefore, that

. . .the oppressed Negro citizens of the United States, segregated, discriminated against, and long the target of violence, suffer from genocide as the result of the consistent, conscious, unified policies of every branch of government. If the General Assembly acts as the conscience of mankind and therefore acts favorably on our petition, it will have served the cause of peace.

With the Cold War raging, the U.S. government maneuvered to prevent the United Nations from formally debating or even considering the charges brought in the petition. Working behind the scenes, they were able to prevent any discussion of the petition by the U.N. Commission on Human Rights. 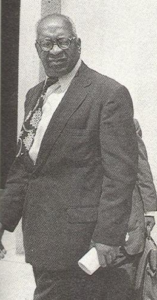 The U.S. corporate media gave scant coverage to the petition or the crimes it documents. The CRC is labeled a “Communist front organization,” and the few Government officials who comment on the petition describe it as “Communist propaganda.” Elsewhere in the world, however, it was well received and extensively covered in the press. In Europe, Africa, and Asia where the U.S. is competing against the Soviet Union and China for political influence, the document weakens American “Free World” claims and its assertion of global moral leadership, particularly among nonwhite peoples struggling against colonial rule.

As the Black Freedom Movement gathered strength in the following years, Cold War geo-politics influenced Washington’s reaction to major events like the Sit-ins, Freedom Rides, ‘Ole Miss, and so on.

On his return to the United States, Patterson’s passport was seized by the State Department so he could no longer speak to foreign audiences about the denial of human rights endured by African Americans and other people of color.

Robeson too was prevented from leaving the country. They and other CRC leaders were harassed and persecuted by the FBI and other federal agencies for the rest of their lives.

Tower of Power - Live at Soundstage ...