John Henry Lewis was the first black American to win the light heavyweight championship, a title he held for four years. And as with many light heavyweights, Lewis often fought larger heavyweights to gain more attention and bigger purses. Lewis was not the first fighter in his family. His great-great uncle was Tom Molineaux, an early bare knuckle heavyweight who traveled to England to challenge for the title. 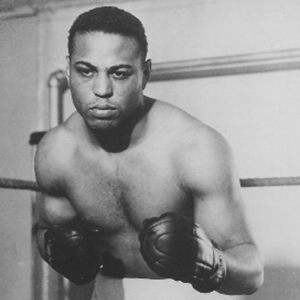 Born in Los Angeles, California, Lewis moved to Arizona when his father got a job as trainer for the University of Arizona athletic teams. Lewis's father also opened a gym in Phoenix. At a very early age, Lewis and his brother Christy were put to work at the gym, fighting "midget boxing" exhibitions. Later, the Lewises toured the Southwest in such exhibitions.
Lewis lived most of his adult life in Oakland, California, where he and his brothers operated a boxing gym for many years.
Given this early training, Lewis was well-prepared to turn professional at the age of fourteen as a welterweight. Three years later Lewis won a decision over Lloyd Phelps to take what was considered to be the Arizona middleweight championship. In 1932, Lewis received wide attention when he decisioned future heavyweight champion James J. Braddock in San Francisco and lost a close decision in a non-title bout with light heavyweight champion Maxie Rosenbloom. 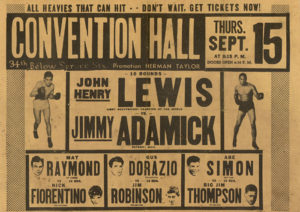 The next year, Lewis scored two victories over Rosenbloom, a closely matched rival who came back to defeat Lewis twice. Lewis lost a rematch with Braddock in his first New York appearance in 1934. Managed by the owner of the Pittsburgh Crawfords Negro League baseball team, Gus Greenlee, Lewis fought as often as possible in an attempt to secure a shot at the title. In 1935, he got his chance, fighting for the light heavyweight belt against Bob Olin in St. Louis. But being champ apparently didn't mean being paid. Under the terms of his contract, Lewis forfeited his purse when the sparse crowd failed to provide the minimum expected gate.

Lewis possessed all of the attributes of a great boxer. He had the speed of a welterweight, was aggressive, skilled at defense, and a master puncher. The lack of financial reward was a problem, however. In 1939, Lewis signed for a heavyweight title fight against his friend, Joe Louis. Although it was not widely known, Lewis was almost blind in one eye and had been for some years. Joe Louis gave his friend a chance for a big payday before the eye problem forced him to retire. Louis made short work of the challenger, knocking him out in one round. This fight was the only knockout Lewis suffered in 117 fights. Lewis retired after this defeat.

Excerpted with permission from 'The Boxing Register' by James B. Roberts and Alexander G. Skutt, copyright © 1999 by McBooks Press. All rights reserved.
* * *
John Henry Lewis in white, in undated title defense against unnamed opponent