Shakir Stewart—Gone Much Too Early

Shakir Stewart, the executive who succeeded Jay-Z as the head of the hip-hop music label Def Jam Recordings, died in 2008 from a self-inflicted gunshot wound at his home in suburban Atlanta. He was 34.

Stewart was found in the bathroom of his home in Marietta, Cobb County police spokeswoman Cassie Reece said. He was pronounced dead at a nearby hospital.

Police described the shooting as self-inflicted and would not say who discovered Stewart, executive vice president of the New York-based label.

The record label issued a statement on behalf of Stewart's fiancee, Michelle Rivers, and his family.

Shakir Stewart was born in Oakland, California and realized very early that the music "business" was his destiny. In 1989, Shakir worked the neighborhood music scene as a club promoter. Recognizing that his flair for marketing and promoting had limitless potential, Shakir enrolled in Morehouse College, in Atlanta, Georgia and in 1996, graduated with a Bachelor of Science in Marketing.

During his years at Morehouse, Shakir became known in the then, budding, "dirty south", as a concert promoter; promoting for top notch talents like Luke, Scarface, Nas, Too Short to name a few. Immediately after graduating, he incorporated the art of negotiating into his marketing & promotions arsenal, partnered with a few acquaintances and started a promotions company. The company's success led to the opening of a just as successful recording studio, Noontime Music. It wasn't long before Shakir Stewart found himself forming a joint venture with Epic records.

His accomplishments at such an early age caught the attention of Hitco Music Publishing, signing Shakir as their Creative Director. It was during his time at Hitco, that Shakir's A&R talents were unearthed, as then President of Arista and Hitco's owner, Antonio "L.A." Reid offered him an A&R consultant position with LaFace Records, of which he was the CEO. 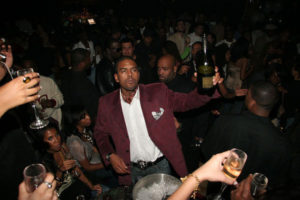 Stewart signed artists such as Rick Ross and Young Jeezy to the label before being named in June to the post once filled by Shawn "Jay-Z" Carter.

To his credit, Mr. Stewart was responsible for signing such talent as R&B sensation Ciara, rap stars Rick Ross and Young Jeezy, publishing the successive no# 1 hits in Billboard's Hot 100 Chart as Destiny Child's "Survivor", Outkast's "The Way You Move", both Beyonce's "Crazy in Love", and "Baby Boy" and assembling and organizing Usher's massive hit "Yeah" on the twelve time platinum album Confessions.