McClymonds' Own Genius Of The Sax, John Handy 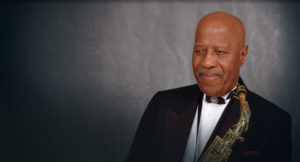 John Handy, Biography
John Handy has been honored with the Bill Graham Lifetime Achievement Award from the 1997 Bay Area Music Awards!. Having played professionally since he was fifteen, the saxophonist has worn coats of many cultures throughout his long, prolific career, changing them as often as a chameleon alters its hues.

John Handy was born in Dallas and moved to Oakland in 1948. As a teenager, he played around the Bay Area in blues bands led by Roy Hawkins, Pee Wee Crayton, Little Willie Littlefield, Jimmy McCracklin, Wild Willie Moore, and Dell Graham, and jazz artists such as Gerald Wilson, Teddy Edwards, and Frank Morgan. He made his recording debut in 1953 with Lowell Pulson . Although his musical approach changed after he heard Charlie Parker at San Francisco's Say When Club, the influence of such earlier saxophone favorites as Johnny Hodges, Louis Jordan, and Earl Bostic remained strong and contributed greatly to the development of his unique, searing style. Indeed, Handy is one of the few musicians who have come close to rivaling Bostic's awesome command of the instrument's upper registers. 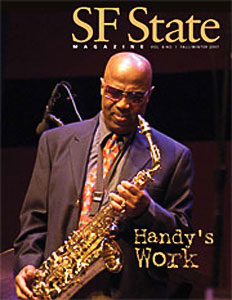 Handy went on to compose and play classical pieces, performing "Concerto for Jazz Soloist and Orchestra" with the San Francisco Symphony in 1970, and in more recent years he has composed with the UC San Francisco orchestra.

After a stint in the Army, Handy headed for New York in 1958 and was soon hired by bassist Charles Mingus, who found the saxophonist's highly emotive style ideally suited to his alternately sweet and volatile music. Although Handy was a member of Mingus's band for less than a year, the association brought him a contract with Roulette Records. Because his distinctive approach didn't fit into either the prevailing East Coast or West Coast schools of the period, the company labeled Handy's music "No Coast Jazz."

Returning to San Francisco in 1962 to finish college, Handy stayed and has led a succession of groups ever since. The most successful was the one that featured violinist Michael White and Jerry Hahn. They were a sensation at the 1965 Monterey Jazz Festival and recorded several best-selling albums for Columbia. Indeed, Handy's performances of his own "Spanish Lady" and "If Only We Knew", the pinnacle notes of that Monterey Jazz Festival, earned Grammy nominations for both performance and composition.