From her first days in Washington, her policy outlook stemmed from Black revolutionary ideas and street activism, something you’ll almost never find in the typical nuclear weapons expert’s biography. She looks at systems and whether they succeed or fail to protect the most marginalized.

Long before Representative Barbara Lee was sworn in as a member of Congress, she was working as an aide for the late congressman Ron Dellums, who was known for his anti-war and nuclear proliferation stances. Dellums represented her district in Oakland, California, and shared a similar worldview with Lee, who had volunteered for the Black Panthers back home. After joining his Washington office in 1974, Dellums got her to join a nonproliferation group called SANE/FREEZE (now Peace Action) to learn more about nuclear weapons policy—and to get more Black people engaged in the anti-nuclear weapons movement. 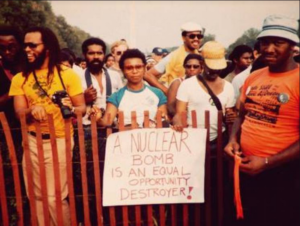 Barbara Lee at a protest against nuclear weapons

At one of her first protests, she carried a sign she and other members felt would draw Black onlookers.

“The sign that I carried said it is an equal opportunity destroyer,” Lee said. “Part of what we tried to do was get African-Americans specifically involved in the movement for peace and justice—that we had to re-prioritize our resources from building nuclear weapons into domestic priorities, recognizing we have and will continue to have a strong national defense. But, if we don't get involved in non-proliferation issues, if in fact we don't have a freeze on nuclear weapons, if in fact we don't get engaged, then our voices are left out of such a huge life and death issue.”

More than four decades later, Lee has become arguably the most progressive foreign policy voice in Congress and an outspoken non-proliferation, arms control, and disarmament advocate. Her resume includes assignments on some of the most critical House committees, including her current role as co-chair of the Steering and Budget Committee which oversees all federal spending. She also engaged in one of the most patriotic political acts in recent memory when she voted “no” against the Authorization for the Use of Military Force (AUMF) right after September 11, 2001. It used broad language that empowered Bush and presidents after him to authorize force against "nations, organizations, or persons [the President] determines planned, authorized, committed, or aided the terrorist attacks that occurred on September 11, 2001, or harbored such organizations or persons, in order to prevent any future acts of international terrorism against the United States by such nations, organizations or persons."  But, the AUMF  has been used much more broadly to justify almost any anti-terrorist activity. In fact, lawmakers voted to prevent Trump from taking military action against Iran because they worried he would use the AUMF to justify an attack. 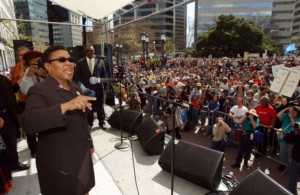 U.S. Congresswoman Barbara Lee (D-CA) addresses antiwar protesters during a rally at Frank Ogawa Plaza on April 5, 2003, in Oakland, California. About 5,000 people rallied against the U.S.-led war on Iraq.

Speaking to National Geographic about her vote against the AUMF, Alicia Garza, a Black Lives Matter co-founder, said “when we look back all these years later, I think we can agree that not only was she courageous, but she was visionary: She understood that war begets war, violence begets violence.” Lee has been able to get some of her Republican colleagues to support a repeal of the AUMF. The most serious push came in 2017, when Paul Ryan was House Speaker and before the Democrats took over the chamber a year later. The repeal didn’t come up for a vote, but the movement began to gather steam. A 2017 profile of Lee’s lone “no” vote in POLITICO notes that she has been successful in slowly convincing Republicans of the harm of military adventurism.

Her advocacy took her so far as appearing on a talk-show with radio host John Fredericks, a staunch Trump supporter. Their world views could not be more different, but Lee won Fredericks over. "We’re going to start a 'Draft Lee for Democratic minority leader' right here on my radio show,” he said. “Lee for minority leader. I’m going to start that rumor.”

You could not have convinced Lee during her college years that her life trajectory would lead her to the House floor to cast that vote in 2001. She was too much a revolutionary to be a politician and generally disengaged with the process. During a government class at Mills College, her professor said students had to volunteer for a presidential campaign to pass the class. Lee decided she would flunk the class because she didn’t believe in politics. She was also president of the Black Student Union and had invited congresswoman and 1972 presidential candidate Shirley Chisholm to speak at a campus event. When Chisholm took the stage and started speaking, Lee remembers her talking about being pro-choice, anti-Vietnam War, and coalition building. Chisholm also spoke fluent Spanish, Lee remembers. After Chisholm spoke, Lee was surprised at how accessible the candidate was because the press wasn’t really covering her. She asked Chisolm if she could volunteer on the Congresswoman’s presidential campaign to pass her government class. After working on Chisholm’s campaign, Lee went on to serve as a delegate for the congresswoman in Miami at the 1972 Democratic National Convention.

Her next political move took her to Washington in 1974 to work for Dellums. She went on to serve in the California General Assembly until 1998 when she won the 9th Congressional District race in a special election after her old boss Dellums resigned from the seat. Since 2000, she has sponsored more than 131 foreign policy bills. From her first days in Washington, her policy outlook stemmed from Black revolutionary ideas and street activism, something you’ll almost never find in the typical nuclear weapons expert’s biography. She looks at systems and whether they succeed or fail to protect the most marginalized. 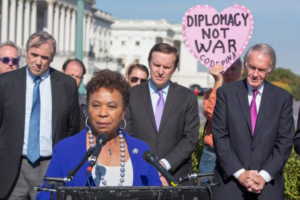 Rep. Barbara Lee (D-CA) speaks at the news conference held by Congressional Democrats demanding congressional authorization before a first strike on North Korea outside the capital on November 2, 2017, in Washington, DC.

Over the years, she has tried to get her colleagues to cut at least 10 percent from the Pentagon’s budget and to reallocate that money towards social services. The efforts would usually fail miserably, but in 2020 more members of Congress voted for a cut than ever before, according to The Nation. Lee explained that much of what is holding up cuts to defense spending is a “cycle of posturing” and a belief that if one country is developing nuclear weapons, then the U.S. should develop nuclear weapons. With a new Biden Administration, Lee is hoping to change that thinking. She and her colleagues in the Progressive Caucus believe they can pass a 10 percent cut in both houses if they do a better job of educating their colleagues on the benefits of reallocating funding from the Pentagon to other services that would benefit their congressional districts. I asked her if 10 percent ($74 billion) was a big enough cut.

“That's significant for what we want in terms of housing, education, our domestic priorities,” she said. “But, it's not that large of a cut for defense. What I've learned over the years is that many people just don't know how large the defense budget is. And, a lot of members have jobs in their districts and who wants to cast a vote that could lay off jobs?”

Lee also believes the Black Lives Matter Movement should be involved more in nonproliferation, arms control, and disarmament efforts because of its mobilization capacity and message on safety against police violence. Those activists would be assets to the arms control and disarmament movements and to efforts to decrease Pentagon spending.

“I think we have to get the street more involved, the movements more involved in issues around defense spending,” she said. “Because we know certainly when you talk about systemic racism, when you talk about re-ordering our national priorities in terms of funding, that is clearly a Department where we need to eliminate waste, fraud, and abuse. We need to divest from nuclear weapons and these endless wars. If we did that, we would be able to allocate more resources to economic growth and job creation. So we have to have that as part of the movement's message.”

She has seen the evolution of Black women in politics from the time she worked on Chisholm’s presidential campaign in 1972 to the election of America’s first Black female Vice President, Kamala Harris. With each of those milestones, Black women continue to lead the national discourse on the security of America. They also pay dearly for their patriotism. She received death threats for years because of her “no” vote on the AUMF. Some of the hate mail she got reflected the worst of the racist and sexist attitudes many Americans have towards Black women. A lot of people misunderstand why she voted “no.” She did not object to Bush using military force. Lee is not a pacifist.  Her issue was with giving him unchecked power to start any war he wanted.

Being a Black woman informs all of her stances and her lineage of Black female resistance fuels her resolve to be at the table during major foreign policy decisions that impact marginalized, resource-starved communities.

Tower of Power - Live at Soundstage ...