The three white men who chased and killed Ahmaud Arbery have been found guilty of murder, following his 2020 shooting death in south Georgia, which led to a wave of racial justice protest and a resurgence of the Black Lives Matter movement in the U.S. 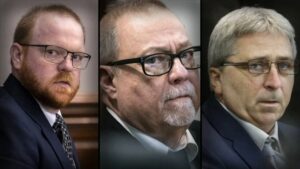 Travis McMicheal, his father, Greg McMichael, and their neighbour William “Roddie” Bryan were each convicted for murdering Arbery, who was unarmed, after pursuing him in February last year and claiming, without evidence, he had been involved in a spate of burglaries in their neighborhood.

On Wednesday the jury returned unanimous decisions, convicted Travis McMichael, who opened fire on Arbery three times with a pump action shotgun, on all nine counts, including charges of malice and felony murder.

The three men each stood before the judge, Timothy Walmsley, who read the verdicts to the courtroom before remanding the defendants into custody.

Sentencing will be scheduled for a later date and all three face the possibility of life in prison.

The verdict was announced after two weeks of testimony and evidence in the closely watched trial, during which the McMichaels had claimed the shooting was an act of self-defense and that they had attempted to enact a citizen’s arrest.

Travis McMichael was the only one of the three men to take the stand during trial, and had argued he shot Arbery with his shotgun in self-defense. The defendants said they had tried to enact a citizen’s arrest on Arbery, an argument disputed by the prosecution, who said they had no probable cause to detain Arbery, a frequent jogger in the neighborhood. 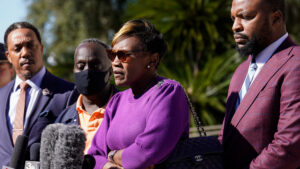 Speaking a day before the jury came to its verdict, the parents of Ahmaud Arbery said that they approved of the prosecutor’s performance in the courtroom and believed that the jury would come back with a guilty verdict.

Although the case became an emblem of racial injustice and bias in the US criminal justice system to many, prosecutors ultimately left the issue of racism outside the case. In closing arguments, lead prosecutor Linda Dunikoski made just a passing reference to the allegations of racial bias, stating: “they [the defendants] made their decision to attack Ahmaud Arbery in their driveways, because he was a Black man running down the street.”

But allegations of racism and intentional bias surrounded the court case throughout.

Lawyers acting for the Arbery family had expressed significant concerns at the trial’s outset after a jury of 11 white members and one Black member was selected. Defense lawyers had struck all but one potential Black juror from the jury pool, leading judge Timothy Walmsley to declare there appeared to be “intentional discrimination” during the selection process.

Defense attorneys repeatedly requested a mistrial due to activists congregating outside the Glynn county courthouse and also requested that the judge limit the number of Black pastors in the public viewing space, claiming the pastors were intimidating to the jury.

In closing, lawyers for each defendant also sought to attack Arbery himself, claiming his decisions had ultimately led to the fatal shooting.

Laura Hogue, representing Greg McMichael, described Arbery during closing arguments as a “recurring night-time intruder” whose presence was “frightening and unsettling”, prompting instant criticism from Arbery’s parents, who said the defense had deliberately mischaracterized their son.