***Chenier's most vivid memories of his first taste of NBA playoff action as a rookie in 1972 focus on the tremendous battles in the paint between Knicks' power forward Dave DeBusschere and his counterpart on the Bullets, Gus Johnson. They had faced each other for the previous several years and, although Johnson was nearing the end of the line, he still asked no quarter and gave none either. "Gus would just manhandle DeBusschere and DeBusschere would come back on the very next play and just manhandle Gus," Chenier says. "They would go at it but never complain. That is the one thing that I will always remember about them. And I remember DeBusschere talking about Gus after the funeral or after he passed and you could tell that they had mutual admiration and mutual respect."

By 1972-73, Johnson had moved on to the ABA's Indiana Pacers, helping them win a title before he retired, but that did not mean that there was peace and tranquility in the paint when the Knicks and Bullets played--not with Knicks' center Willis Reed and the Bullets' Wes Unseld fighting for position. "Willis was in and out of the lineup because of his injuries," Chenier remembers. "When he was in there, because of his knee, Willis had to be even more physical. So he and Wes were banging and I said to myself, 'Man, I don't want to have anything to do with that! I'll stay out here and shoot jump shots.'" 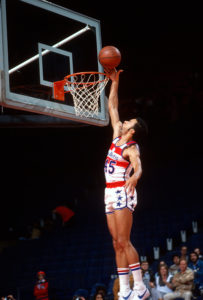 ***Chenier mentions an often overlooked factor that hurt the Bullets in their stunning 4-0 loss to the underdog Golden State Warriors in the 1975 NBA Finals. "Jimmy Jones didn't start but he was a player who could fill in anywhere and he was our first man off the bench. He was averaging about 20 minutes and he could play with me or he could play with Kevin Porter or he could play with both of us by being the '3.' So he was a top notch player who gave us a lot of flexibility. He got hurt during the Boston series. So, that hurt us. But give a lot of credit to Golden State and the timing of their players kind of coming together."

***Chenier lists Pete Maravich, Earl Monroe, Walt Frazier, Nate Archibald and Jo Jo White as some of the toughest players that he faced. Chenier comments, "Pete could embarrass you. He could go for 50 on you and make it look as easy as possible. Earl could do the same thing. Earl didn't jump that high. You thought that you had him stopped, you thought that you had his shot blocked and he'd still fade back a little bit and loft that soft shot over you. That New York team had Earl and Frazier in the backcourt and then they had DeBusschere, Bradley and Lucas--that team was phenomenal. We played them three consecutive years in the playoffs and they beat us each time." 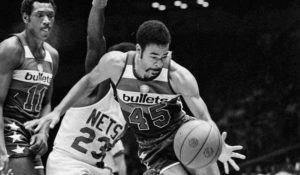 ***It is well known that entertainers want to be athletes and vice versa. This is not just a recent phenomenon. Chenier recalls playing in a celebrity three on three tournament in Las Vegas in which the teams consisted of an active NBA player, a retired NBA player and an entertainer. Chenier was paired with the retired Zelmo Beaty and legendary singer Marvin Gaye and they played against David Thompson, Jerry Lucas and Pat Boone, the famous singer who less famously was once a part owner of the ABA's Oakland Oaks. Chenier didn't say who won, but noted that Gaye was a big sports fan. Of course, Gaye later did a soulful rendition of the National Anthem at the 1983 NBA All-Star Game less than a year before he was shot and killed by his father.