Setting The Tone For Oakland's Own 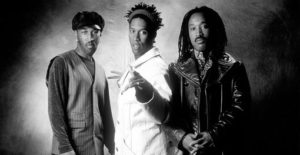 The three members of the smash R&B band Tony! Toni! Tone! grew up in Oakland, California, when that city was a hotbed of funk and soul innovation. As a result, they bring to their own records a dedication to the old-style melodic groove that stands out in the polished, machine-driven, hip-hop era. Playing their own instruments and singing harmonies modeled on their favorite soul artists' finest singles, the Tonys please both fans and critics and have managed to extend their audience beyond even their impressive R&B following. Though walking the line between continuing in an honored tradition and purveying unabashed nostalgia has been a tricky task, the group came into its own enough to claim the mantle--used as the title of their 1993 album--Sons of Soul.

Brothers Dwayne and Raphael Wiggins are actually sons of the blues; their father played guitar in a blues band, and Raphael first played in front of an audience as the group's bassist at the age of seven. Dwayne told Request that his father "was the one who got me started on the guitar. He was down with us being musicians, but he was also down with being a man and being responsible for yourself. You gotta go out there and work. He was always a working man." Like his brother, Dwayne began playing in nightclubs at a very young age. "We got to play," he recalled, "and then when the break time came, they had to take us out the back." Their cousin Tim Christian Riley had a similar musical upbringing--he continued to play drums in church even after achieving fame as one of the Tonys--and the three played music together growing up.

Riley described this atmosphere of constant jamming in Rolling Stone: "Like in the neighborhood, there was always competitions. I mean, it would be like school talent shows, and you'd come home from school, and there would be like five or six drummers in their houses playing. Everyone just played, and you had to stay on top of it." The three attended Castlemont High School and sang in its esteemed Castleers Choir, which performed in Hawaii and Jamaica. 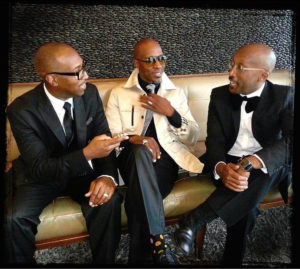 Even before the trio decided to form a band--which they intended to do "from day zero," Raphael claimed in People-- they came up with the name they would eventually use. "When we went out," Dwayne recollected in Rolling Stone, "we liked to go shopping at vintage-clothing stores, buy old suits and big shoes, and it was more a character thing. We invented this character, Tony Toni Tone." Riley elaborated in People that a "guy on TV named Tony who used to dress real fly, and a friend of ours always had to be looking perfect--his hair looking good and everything--so we gave him Tony as a nickname and started having fun with it. If somebody else came into the house who looked better than he did, we'd say, `That's a Tony Tony.' When we had our first gig, we were like, 'We don't have a name.' So we just invented it on the spot."

Before they had a first gig together, though, the trio spent years on the Oakland music scene, which had been dominated by such influential figures as "East Bay Grease" pioneers Tower of Power, singer-songwriter and multi-instrumentalist Sly Stone, and bassist Larry Graham, who played with Stone's band and later led his own successful outfit. Dwayne claimed in the Request interview that he met Graham "back when he had this 1970 Cadillac with big-ass side pipes on it." The Wiggins brothers and Riley played with a number of different acts before joining up to back singer-percussionist and former Prince acolyte Sheila E. on tour. Afterward they began work on their own project.

The group eventually signed with Mercury Records, having made a strong impression on label president Ed Eckstine. Five songs from the Tonys' 1988 debut album Who?--among them "Little Walter," "Baby Doll" and "For the Love of You"--became hits, and the album went gold. Produced by Denzil Foster and Thomas McElroy, who would later develop and produce the smash vocal quartet En Vogue, the album immediately established the Tonys as contenders on the tough and volatile R&B scene. 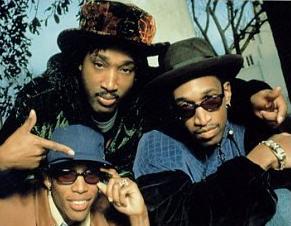 Tony! Toni! Tone! produced their follow-up, 1990's The Revival, themselves. Gerry Brown, who engineered the group's second and third albums, told Musician that "Eckstine gave the Tonys about $3000 to go into the studio. They came up with 'Feels Good' and 'The Blues.' That gave Ed an indication that they could get some stuff done." Eckstine was right. The Revival reached and exceeded platinum status; "Feels Good" made it to the pop Top Ten and the number one R&B position, while "The Blues," "It Never Rains in Southern California," and "Whatever You Want" were also R&B Top Ten hits.

As to producing, Raphel opined in Request that it was "harder to think about than to actually do. Thinking about completing a project from A to Z is probably worse than just to go ahead with it." Dwayne, meanwhile, said in an interview with Michael Goldberg of Musician that "we still don't known how to produce," while Riley confided, "We were forced. That's the bottom line. We're just musicians. But someone had to do it." Vibe's Elysa Gardner felt that the album, "following on the heels of a charming but unspectacular debut," showed that the trio "had the stuff that separates those artists who synthesize their influences in fresh, exciting ways from those who merely wear them on their sleeves." 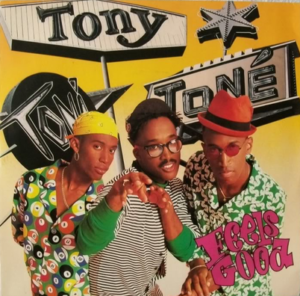 In addition to their own albums, Dwayne, Raphel, and Riley also contributed the song "Me and You" to the platinum soundtrack of John Singleton's hit 1991 film Boyz N the Hood, the title song to 1991's House Party 2, the comedy sequel starring rappers Kid 'n Play, and "Waiting on You" to Singleton's second film, Poetic Justice. By 1993, however, the Tonys were concentrating primarily on their new album. They wanted to emphasize the warm, spontaneous feel of their favorite soul albums. "Guys would sit down with a guitar, drums and a keyboard and come up with somethin'," Dwayne reminded Goldberg, speaking of the legendary sounds produced for the Motown and Stax soul labels. "But today when most people write, it's like a computer get-down. We just went back to home with our thing. That's where the flavor came from and that's what the whole title is about, Sons of Soul. Like a tribute to the old flavor."

Though it was begun in California, much of Sons of Soul was written and recorded in Trinidad. "There were a couple of times when I think the record company really wanted to put what we had out," Dwayne recalled, "but we ourselves didn't feel like the album was done." Intending merely to polish what they'd begun in the United States, the group ended up starting a number of new songs in the tropical spot, while immersing themselves in Caribbean musical styles.

"We'd heard dancehall, but we didn't really know anything about it before going there," Dwayne explained in Request. "We would go to these block parties"--nighttime dance-fests in blockaded parking lots powered by massive loudspeakers--"and you could hear them from almost a mile away. You'd just park on the street and walk to the party along with four or five thousand other people, all partying with these giant speakers all over the place. And this happened just about every weekend." The trio would record well into the night, go out and immerse themselves in the nightlife until the wee hours, and then return to the studio to work some more. The track "Dance Hall" even features a "ragamuffin" rap from Trinidadian MC General Grant. All in all, the Tonys recorded nearly 40 songs for Sons of Soul. Dwayne told Billboard that narrowing them down wasn't terribly hard: "The love songs, the lovemaking songs set the pace for the album. We kept our audience in mind in deciding what would make the final selection."
The album's first single, "If I Had No Loot," was an immediate smash, and the ballad "Anniversary" looked to follow in its footsteps. But Bill Forman of Request referred to "Tell Me Mama" as the recording's "most brilliant track," calling it "the greatest hit the Jackson 5 never recorded, an instant classic with an airtight groove and the kind of hooks you'll still be humming long after you've lasered the CD into dust." A GQ reviewer felt that "the musicianly details justify the album's title," while an Entertainment Weekly writer declared, "It's fresh, funky, fierce, and it feels good." Jonathan Bernstein of Spin was one of the few detractors, criticizing the Tonys for "sequeling previous hits" and for what he called "the oafish 'Ex-Girlfriend,' whose smooth refrain suffixes the title's tune with the words '... is a ho.' Talk about breaking the mood."

In any event, the Tonys had clearly established themselves as fixtures on the R&B scene. "Conscious of history, the Tonyies have made themselves a band of the here and now," wrote Christopher John Farley of Time. "We're not trying to be 'retro,'" Dwayne insisted in Billboard, "we're just being the bridge between old R&B and hip-hop. We're just using the music we grew up listening to, the music we always enjoyed as the basis for what we're doing now." Like those enduring records, he noted in the Musician interview, "Our production philosophy is 'Less is more.' Put it like that. It's all about making it fun, man. Having fun and taking chances."