Last month, Lateefah Simon, president of the BART Board of Directors, sat down with Prism to talk about local leadership and how to lead from a strong value proposition aligned with progressive values. Given the current COVID-19 pandemic and the struggle over how to govern and provide relief to millions, Simon represents a profile in leadership, providing a perspective for viewing and engaging in public service work that offers some food for thought.

Rooted in her commitment to making sure systems are accessible and accountable to the people most in need, Simon says that the historic nature of progressive advocacy has trended toward grounding advocacy work to the benefit of directly impacted people and communities.

“Historically, progressive social movements have pushed government actors to see, understand, and implement policies on behalf of poor people and working class people. This is our duty … social movements and progressive [elected officials] have no choice but to push for support for folks who will lose their livelihoods.”

Over the past couple of weeks, the country has been thrust into an uncharted territory beyond mere emergency preparedness. Every aspect of daily life is being stretched to the margins in the current pandemic. Simon’s leadership and framing is an example of how leadership grounded in deep empathy leads to decision making that provides for all people.

When asked about her work as BART Board president, Simon said, “I’m ecstatic that I get to talk and think and work for transportation justice seven days a week.” Taking this value with her into her work, Simon describes the challenges of working within a system such as BART.

“I’m challenged with the idea that our system is in the nucleus of a national epidemic of homeless, mental health, and opiate crisis. When people have been pushed out of everywhere else, they go in the tunnels. I’m challenged that people don’t want to see the experience close to this crisis. Policing doesn't rid us of the realities that cities and counties are not taking care of people in the worst moments of their lives. While I'm trying to move forward many progressive ideas, I want to create opportunities for folks to experience safety but not in a space of over-policing and denying people of their civil liberties.”

Reflecting on these challenges facing the board, Simon said, “I run a train system with no human services dollars.” BART officials and staff are often faced with issues not traditionally thought of as being a part of running a train system, such as the rights of undocumented immigrants, homelessness, and poverty. Consideration for the wraparound issues and structures necessary to support people served by BART daily have challenged Simon and her colleagues to approach policy-making differently.

She pointed to BART’s status as the first sanctuary transit system in the country. The “Safe Transit” policy affirmed the transit authority’s commitment and “dedication to the values of dignity, respect, and inclusivity regardless of ethnic or national origin, gender, gender identity, race, religious affiliation, sexual orientation, or immigration status.” This policy was passed with the intent to limit BART police cooperation with federal immigration officials, particularly in sharing information about undocumented immigrants.

“That first win encouraged me to do so much more,” Simon said. 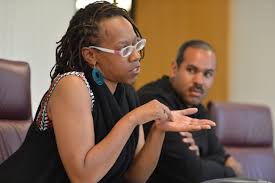 Although the movement to get a fare discount began before Simon’s tenure on the board, she pointed to it as an example of how people had shifted power and organized to get to a recently launched pilot which provides for a “20% discount per trip to adult riders earning 200% or less of the federal poverty level.” Motivated by the murder of Nia Wilson, Simon said that she was committed to putting forth an opportunity to look at justice differently. After a two-year fight, the BART board unanimously passed legislation for unarmed ambassadors. The first 10 unarmed ambassadors were deployed in a pilot last month.

After the passing of her husband, Simon found herself and her children using public transportation. Simon shared that as a person who is legally blind, she had never driven a car. She began directly engaging with the public transportation system at every juncture in her life. Going to work or dropping off her younger daughter at daycare, Simon found public transportation had become part of her everyday experience. Taking her deeply held belief that people closest to the problems should be a part of proposing solutions, Simon ran to serve District 7 on the BART Board of Directors.

With no savings and a lot of heart, Simon embraced the challenge of the moment and expanded the idea of who could run for office, winning all 19 cities within District 7 in November 2016. Having served on the board for a little over three years, she was recently elected board president. In thinking about her run for office, Simon says that “everyone who feels like they should run, should run, and they should lead.”

Simon started organizing full time at 17 years old as a young mother. She was offered the opportunity to organize with the Center for Young Women’s Development, now the Young Women’s Freedom Center, a peer-run organization assisting young women who were involved in the criminal justice system. She later became executive director, building the organization into a national and internationally recognized effort. Her experience with reentry services led Simon to working with then-San Francisco District Attorney Kamala Harris.

“Throughout my trajectory in the work, I've always considered myself an organizer. I went from the center working and organizing with women and I was asked to launch and lead Kamala Harris’ reentry program in the DA office. She said whatever you’re doing over there, can we do that over there. But understand the system you're working with.”

Her work has always focused on figuring out how every system she touches can be improved by centering directly impacted people and communities. After working with the San Francisco District Attorney’s Office, Simon became executive director of the Lawyer’s Committee for Civil Rights of the San Francisco Bay Area.

Taking her experiences and background with her into each position she holds and the system she leads, Simon described her advocacy style as thinking like a mother and legislating like a daughter. Simon asks herself, “Could my mother access this particular system at this moment right now? Could she find herself in this space?” For Simon, her mother is representative of countless people from directly impacted communities who need to engage in systems that are sometimes prohibitive either due to economic, physical, and social accessibility. She is further guided by creating a world in which her two free Black daughters can grow and shape the world around them.

As the nation grapples with a public health emergency, there is a real need for leadership centered on protecting all people and expanding the determination of what is possible. Simon represents a leadership and value model needed in this moment to protect the health and welfare of all people.

From the city council to the water board, the perspective and experience of people who have direct experience with the conditions of the people affected by these systems can be invaluable. State and local leaders and elected officials have been stepping up to fill in the gaps in the federal response. Simon’s organizing and governance commitments, rooted in the most marginalized people, is illustrative of the way forward now.